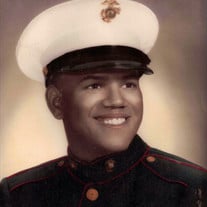 Mr. Willie James Jordan, 75, was born on November 28, 1945 to the union of the late Roland Kee Jordan and the late Ora Mae McCloud Jordan in Logan, West Virginia. At an early age, Willie accepted Christ as his Lord and Savior. During his youth, Willie attended Anderson High School in Anderson, Indiana. After completion of school, Willie dedicated his services to his country by serving in the U.S Marine Corps from January 1966 through July 1968 as an 0311 Rifleman and Small Arms Proof Director in the Vietnam War. After Willie’s nearly 3 years of dedicated service to his country and serving in the Vietnam War he later received an honorable discharge due to severe injuries while serving in the line of duty. During his devoted service to his country, Willie received a number of decorations, citations, medals, and badges including The Purple Heart Medal, National Defense Service Medal, Vietnam Service Medal w/1* Vietnam Campaign Medal and The Rifleman Marksmanship Badge. Once Willie returned home, he began his working career by accepting a job with Delco Remy. Willie traveled many places and befriended many people. He had a passion for cars. He loved, collected, and worked on cars until his health began to fail. Willie carried many titles, to name a few would be: Sergeant Bilko, Billy, Uncle Billy, Daddy, and the most famous of them all would be GRANDADDY. His motto with every aspect of life was SEMPER FIDELIS….meaning always faithful and always loyal. On January 15, 2021 Willie peacefully answered his Master’s call while under the care of Regional Medical Center in Anniston, Alabama and journeyed home free from all the pain and sins of this world to enjoy an eternal life of peace, love, and salvation. He will truly be missed by all his loved ones and all the lives he touched during this walk of life. Upon gaining his wings and accepting his Master’s call, Willie was welcomed come by his parents, Mr. Roland Jordan and Mrs. Ora Jordan; siblings, John Henry, Jr. Rosa Lee Clay, Donald Lee Jordan, Sr. Bobby Gene Jordan, and Lula Bea May. He leaves to cherish his loving memories his beautiful loving and caring daughter, Ms. Shannon Dee Jordan; stepdaughter, Rosemary Townsend; grandchildren, Chareese Monae Jordan and Darvionce Jamal Jordan; great-grandchildren, Zaylan Omarii Riggins, Zy’ari Omaniah Riggins, and Alaia Ayanna; and a host of other relatives and friends.

Mr. Willie James Jordan, 75, was born on November 28, 1945 to the union of the late Roland Kee Jordan and the late Ora Mae McCloud Jordan in Logan, West Virginia. At an early age, Willie accepted Christ as his Lord and Savior. During his... View Obituary & Service Information

The family of Mr. Willie Jordan created this Life Tributes page to make it easy to share your memories.

Send flowers to the Jordan family.