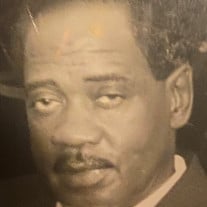 Mr. Walter Ray Jackson began life's journey in Pell City, Alabama on September 8, 1946 to the union of the late Archie Jackson and Janie Freeze Jackson. Mr. Jackson received his formal education in the St. Clair County School System and was a graduate of St. Clair County Training School. He later attended Vocational School where he studied mechanical engineering which soon led him to becoming a Locomotive Engineer with Norfolk Southern Railroad. Mr. Jackson remained a dedicated employee with Norfolk Southern Railroad until he retired. Along Mr. Jackson's 75-year earthly journey, he found and married his soulmate, the former Ms. Rita Martin, and they were blessed with over 43 years of marriage. Mr. Jackson enjoyed entertaining his family and friends with grilling and cooking, that is when he was not at the dog track or playing the slots at the casino. He would even challenge you in a card game from time to time. Although he was skilled in mechanics with the railroad, he loved working on cars and working in his garden. Mr. Jackson was known as a quiet humble man but at the same time he was known as a jokester and was always joking and jiving and some would label him as "Just a Good Old School" type of dude. He was an avid football fan, and the Auburn Tigers were his team of choice. On Wednesday, March 23, 2022 Mr. Walter Ray Jackson entered into eternal rest peacefully while in the comfort of his home surrounded by loved ones. As he transitioned to his eternal rest, he was reunited with his parents and other family members that had gone before him. Mr. Jackson leaves a lifetime of memories that will forever be cherished in the hearts of his loved ones: his loving and devoted wife of 43 years, Rita Martin Jackson; two sons, Courtland (Candice) Jackson and Joel Green; four daughters, Kecia Allen, Christy (Mike) Dixon, Kizzy Green and Latrina (Fabian) Martin; two brothers, Nathaniel (Yetta) Jackson and Ronald (Myrna) Jackson; five sisters, Alice Griffin, Catherine Coleman, Christine Ellison, Annie (Rendon) Marbury and Mary Jane Murray; and a host of grandchildren, great-grandchildren, nieces, nephews, cousins, other relatives and friends.

The family of Walter Jackson created this Life Tributes page to make it easy to share your memories.