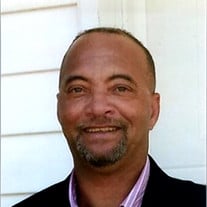 Walter L. Embry began his earthly journey on November 7, 1961 to the union of the late Walter Embry, Jr. and Mary Alice Greer Embry in Lincoln, Alabama. Walter accepted Christ as his Lord and Savior and united with Word Alive International Outreach in Oxford, Alabama. He loved his church family and was a very active member. Walter received his childhood education in the Talladega County School system and was a 1980 graduate of Lincoln High School. Walter loved basketball and his athletic ability for being a star player was shown on the court while playing with the Lincoln Golden Bears. He later began his working career as a warehouse and supply clerk at ATAP, Inc. and remained a dedicated employee until retirement. If you knew Walter, you know he was a very kindhearted and fun-loving person. As Walter was on this journey called life, he became the father of three beautiful children, Megan, Nagail, and Walter. Later in life, he found love when he met and fell in love with his soulmate of nearly 20 years, Rebecca Peek Embry. Walter was very affectionate and compassionate when it came to his family, especially his grandchildren. He loved the Lord with all his heart and was very active in the Men's Group and the Usher Board with his church family at Word Alive International Outreach. Not only did he love basketball and family, but Walter also had a passion for motorcycles, coaching kids, and the Alabama Crimson Tide Football. On Saturday, May 1, 2021 Walter peacefully gained his heavenly wings when he accepted the call of his Master while at his home surrounded by loved ones under the care of Amedysis Hospice. He was preceded in death by his parents, Walter Embry, Jr. and Mary Alice Embry. Walter leaves to cherish his memories his loving and devoted wife, Rebecca Peek Embry; two beautiful daughters, Megan Smith and Nagail (Quincy) White; one son, Walter LaVon (Kaitlin) Embry; one sister, Johnnie Coleman; three brothers, Ray (Erricka) Embry, Doug (Tracey) Embry, and Wayne (Clarissa) Embry; four grandchildren, Destiny White, Bryson Smith, Quincy White, Jr. and waiting the graceful arrival of Baby Kaisyn MariAlyse Embry; and a host of nieces, nephews, other relatives and friends.

The family of Mr. Walter L Embry created this Life Tributes page to make it easy to share your memories.

Send flowers to the Embry family.