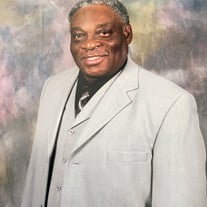 Deacon Walter Gene Cunningham was born on January 18, 1944 to the union of Leo and Lillian Mitchell Cunningham in Talladega, Alabama. Deacon Cunningham confessed Christ as his personal Lord and Savior at an early age and united with Shady Grove Missionary Baptist Church. He received his formal education in the Talladega County School System and was a graduate of Ophelia Hill High School in 1962. Upon completing high school, at the age of 20, Deacon Cunningham migrated to California in February of 1964 in search of better job opportunities. He later met and married his 1st wife, Cheryl Goss, and to that union, two sons were born, Kasey and Rickey. Deacon Cunningham started work as a mechanic at C&H in 1968 where he was a dedicated and devoted employee for 31 years before retiring in 1999. Deacon Cunningham loved the game of softball and received 7 Senior Softball World Series Championship Rings from Florida, Chicago, Palm Springs, CA just to name a few. He was the 1st black player to play softball in Vacaville, CA on the Senior Team. Deacon Cunningham also enjoyed being the master of cutting grass as "Dr. Pastor Clarence Henderson" would call him, and he loved and enjoyed a good milkshake. In the year of 2000, after retirement, Deacon Cunningham moved back to Richeytown, AL and began working in the janitorial services for several years and he also worked at Federal Mogul until he retired for a second time. Once moving back home in 2000, Deacon Cunningham reconnected with his high school friend, Martha Chatmon and in 2005 they were united in Holy Matrimony and to this union they became a family with a total of 4 sons, Kelvin, Kasey, Rickey and Trent. Deacon Cunningham served on the trustee and usher board for several years, was a member of the male chorus and in 2009, he became a Deacon alongside his two brothers, Leon and Larry at Shady Grove Missionary Baptist Church in Munford, Alabama. He also served as the ground keeper for the church and was just an overall outstanding servant of God who will be missed immensely by all who knew him. On Wednesday, April 27, 2022, Deacon Walter Gene Cunningham peacefully traded his 78-year earthly journey for eternal rest in the comfort of his home surrounded by loved ones while under the care of Compassus Hospice. He was preceded in death by his parents, Leo and Lillian Cunningham and sister Nellie Jo Cunningham. Deacon Cunningham leaves to cherish his memories a strong loving and devoted faithful wife, Martha Cunningham, four sons, Kelvin (Chanda) Akles of GA, Kasey Cunningham, and Rickey Cunningham of CA and Trent (Veronica) Akles of AL; seventeen grandchildren; four great-grandchildren; two brothers, Leon (Doretha) Cunningham and Larry (Shirleen) Cunningham; sister-in-law's, Lillie Dell Sampler, Doris Gilbert and Mary Roberson; and a host of other relatives and friends.

Deacon Walter Gene Cunningham was born on January 18, 1944 to the union of Leo and Lillian Mitchell Cunningham in Talladega, Alabama. Deacon Cunningham confessed Christ as his personal Lord and Savior at an early age and united with Shady... View Obituary & Service Information

The family of Walter Cunningham created this Life Tributes page to make it easy to share your memories.

Send flowers to the Cunningham family.