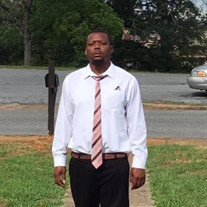 Walter A. Armbrester began his earthly journey on May 28, 1979 to the union of the Walter Armbrester, Sr. and Della Armbrester in Talladega, Alabama. During Walter's adolescent years, he attended St. Campbell Missionary Baptist Church. He received his childhood education in the Talladega County School System and attended Talladega County Central High School. Walter worked various jobs as a laborer with the union Local 559 in Birmingham, Alabama. Walter was well known for the love he had for his family and his energetic spirit, especially when it came to dancing. He really thought he could dance. He would spend countless hours riding his 4-wheeler. This was his favorite pass time and what seem to take the weight of the world off his shoulder. He was the life of the party and he loved relaxing in his own way... On Sunday evening, April 17, 2022, Walter took one final ride on his pride and joy before answering the call of his Master and trading his earthly walk of life for eternal rest. He was preceded in death by his grandson, Kashton Marbury and nephew DaQuan Davis. Leaving behind to cherish all his love and precious memories are his children, Braylon Armbrester and Tybraskia Pope, loving and devoted parents, Walter Armbrester and Della Armbrester; bonus daughters, Kailyn and Hailey Cannon; brother, Dwan Armbrester; sister, Devan Armbrester; granddaughter, Emery Nior Smith; fiance', Erica Cannon; seven aunts, Mable I. Garret, Sarah (Fred) Garrett, Peggy Armbrester, Samantha Garrett, Juliette Jones, Linda (Jessie) Garrett and Rosemary Armbrester; two uncles, Roy (Jessie) Armbrester and Billy Garrett; five nieces, Ladaysha Armbrester, Trevon Armbrester, Heaven Armbrester, Nevaeh Armbrester and Dustani Davis; two nephews, Devonty Averiette and Cavarious Armbrester; and a host of cousins, other relatives and friends. Walter will truly be missed by all the hearts he has touched and lives he has encountered.

Walter A. Armbrester began his earthly journey on May 28, 1979 to the union of the Walter Armbrester, Sr. and Della Armbrester in Talladega, Alabama. During Walter's adolescent years, he attended St. Campbell Missionary Baptist Church. He... View Obituary & Service Information

The family of Walter Armbrester created this Life Tributes page to make it easy to share your memories.

Send flowers to the Armbrester family.