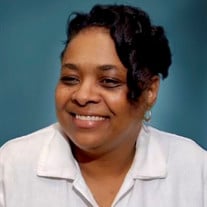 Veronique M. Wallace Loving Mother, Grandmother (Sweetie) & Sister Miss Veronique M. Wallace's journey began on Jul 21, 1960 to the parentage of late Otis Victor Wallace Jr. and the late Barbara Varner Wallace in Sylacauga, AL. At an early age, Veronique, accepted Christ as her Lord and Savior and united with Mt. Olive Baptist Church in Harpersville, AL where she remained a faithful member. Veronique received her childhood education in the Talladega County School System and was a graduate of Childersburg High School. For nearly three decades, Veronique had been a loyal and glowing employee of the United States Postal Service. Many members of her work family described her as a "ray of sunshine". Veronique was definitely the definition of a fun-loving mother, grandmother, and sister. She loved her family with all her heart and was always cooking and baking to show the love. Veonique had a passion for reading, cooking, baking, and gardening, with a beautiful pastel yellow being her favorite choice of color. On Sunday, June 6, 2021, Veronique serenely gained her heavenly wings after receiving her Master's call and departed her walk of life in the comfort of her home in Childersburg, AL. Preceding her in death were her parents and a loving brother, Ronnie Wallace. Her love and precious memories will be cherished and remembered by her two sons, Ryan (Ben) Wallace of Savannah, GA and Julian (Jasmine) Wallace of Pell City, AL; one daughter, Kristen Wallace of Childersburg, AL; two adorable grandchildren, Hannah Scott and Karson Wallace, of Kristen & Julian, respectively; two sisters, Nikita (Earnest) Roston and Adrian (Rodney) Yowe of Childersburg, AL; two brothers; Bahri (Barbara) Wallace of Severn, MD and Gordi Posey of Harrisburg, PA; and a host of other beloved relatives and friends.

The family of Ms. Veronique Michele Wallace created this Life Tributes page to make it easy to share your memories.