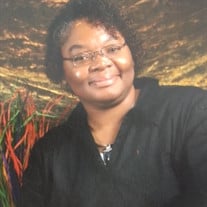 Mrs. Vanessa F. Curry was born to the parentage of Rev. Frank Cunningham and Ethel Richards Cunningham in Talladega on July 18, 1957. Before her health began to fail, Vanessa enjoyed shopping, traveling, singing, and reading her bible. She was a fun-loving and kind-hearted wife, mother, grandmother, sister, and aunt that was cherished immensely by her family and all who knew her. At an early age, Vanessa accepted Christ as her Lord and Savior and united with Rocky Mount Baptist Church where she sang in the choir. With her faith and trust in the Lord, she later joined Faith Temple Ministries, which is where she served faithfully in the choir and on the usher board until her death. Vanessa was a 1975 graduate of Talladega County Training School and later furthered her education by attending Gadsden State Community College and earning a degree in Early Childhood Education. Upon receiving her degree, she began working as a bus driver and Teacher’s Aide at Childersburg Child Development until she retired in June of 2018. Vanessa was affectionately known as “Lady” to many. After retirement, she begin working for Mr. Ollie and Done Right Commercial Cleaning. Along Vanessa’s life journey, she met and married her soulmate, Mr. Larry Curry on January 24, 1981. Although she treated everyone like family, her daughter and granddaughter were her most prized possession. She was a proud mother and grandmother. She always loved, provided, and cared for her family without hesitance. Vanessa F. Curry gained her heavenly wings and accepted her Master’s call peacefully on January 13, 2021 at the age of 65 while under the care of Princeton Baptist Medical Center in Birmingham, Alabama. She was preceded in death by her son, Brent Curry; parents, Rev. Frank Cunningham and Ethel Richards Cunningham; sisters, Mary Frances Walker, Jessie Crump, and Lue Ella Scales; brothers, Maurice Cunningham and John Frank Cunningham. She will forever be cherished and remembered by her husband, Mr. Larry Curry; daughter, Mia C. (Keith) Embry; granddaughter, Shania Embry; two stepdaughters, Sharron Keith and Lakesha (JR) Kelley; one stepson, LaTaurus Curry; three step grandchildren, Shukeyalia Swain, DeVonta Groce, and Tatyana Twymon; five sisters, Thelma McKinney, Patricia (Walter) Holmes, Bessie Ivey, Fannie McCovery, Annie (Charles) Hickman; two brothers, Habron Cunningham and Milton (Connie) Cunningham; three sisters-in-law, Gwendolyn (Ralph) Cade, Sharon (Junior) Lynch, Rhonda Chatman; two brother’s -in-law, William (Rachel) Heard and James (Marcella) Curry; and a host of other relatives and friends.

Mrs. Vanessa F. Curry was born to the parentage of Rev. Frank Cunningham and Ethel Richards Cunningham in Talladega on July 18, 1957. Before her health began to fail, Vanessa enjoyed shopping, traveling, singing, and reading her bible. She was... View Obituary & Service Information

The family of Vanessa F Curry created this Life Tributes page to make it easy to share your memories.

Mrs. Vanessa F. Curry was born to the parentage of Rev. Frank...

Send flowers to the Curry family.