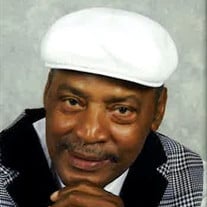 Mr. Ulysses Grant Duncan was born to the union of Mr. and Mrs. Joe and Jennie Chatman Duncan in Talladega, Alabama on October 13, 1937. Mr. Duncan's 83-year life journey has truly been a blessing to everyone he has encounter. As a youth, Mr. Duncan united with Africa Missionary Baptist Church. He attended and graduated from R.R. Moton School. Upon completing school, Mr. Duncan's next path on his earthly journey was to begin working. He worked for 35 years at Bemiston Bag Company before retiring. After his retirement, he worked as a custodian for 4 years at Dixon Middle School and 5 years at Talladega High School. He started his family with a loving daughter, but his life would not be complete until he found and fell in love with his soulmate of 54 years, Mrs. Mary H. Duncan. They were united in holy matrimony in 1967, and to this union four loving children were raised and cared for. Mr. Duncan was a fun loving, kind-hearted, energetic person who loved gardening and barbequing. He was a well-known pillar in his Mardisville community. Mr. Duncan was affectionately known to many as "Grant". On the evening of February 20, 2021, after God had graciously gave "Grant" to us for eighty-three long earthly years, he felt it was time for him to peacefully close his eyes one last time to this earthly world, accept his new wings and fly to his new eternal home on high. At his new home, he was greeted by his loving daughter, Racine Duncan; parents, Mr. and Mrs. Joe and Jennie Duncan; sisters, Elizabeth Estelle, Josephine Headen, Irene Hawkins, and Earline Jackson; brothers, A.D. Duncan and Tommy Lee Duncan. Leaving behind to cherish the many years of Grant's loving memories is his loving and devoted wife of 54 years, Mary H. Duncan; daughter, Connie (Milton) Cunningham of Talladega; sons, Michael (Ruby) Duncan of Jackson, MI, Reginald (Tori) Duncan of Norfolk, Virginia, and Alan Duncan of Talladega, AL; two sisters, Lucy (Edward) White, of Talladega, AL and Josie Duncan of Albion, MI; two brothers, Horace (Geraldine) and George (Mary) Duncan, both of Albion, MI; twelve grandchildren, thirteen great-grandchildren, and a host of nieces, nephews, cousins, other relatives and friends. Although a pillar of the community has gone before us, Mr. Ulyssess Grant Duncan has left a legacy behind and he will truly be missed by all the lives he has touched.

Mr. Ulysses Grant Duncan was born to the union of Mr. and Mrs. Joe and Jennie Chatman Duncan in Talladega, Alabama on October 13, 1937. Mr. Duncan's 83-year life journey has truly been a blessing to everyone he has encounter. As a youth,... View Obituary & Service Information

The family of Mr. Ulyssess Grant Duncan created this Life Tributes page to make it easy to share your memories.

Mr. Ulysses Grant Duncan was born to the union of Mr. and Mrs....

Send flowers to the Duncan family.