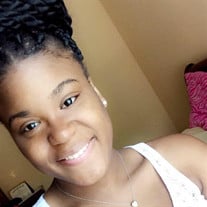 Luverne "Tina" Johnson and Marty L. Cook blessed the world with the birth of Tinia Adjan'ea "Nia" Cook on July 7, 1995, a bubbly and joyous baby girl with a smile that made the sun envious and laughter that was completely infectious in Talladega, Alabama. Tinia was steadfast in faith and knew the Lord as her Savior. She started her education at Stemley Elementary School where she developed a love of softball. Later Tinia transferred to the Pell City School System where she attended Pell City High School and was an enthusiastic member of the ROTC until graduating in 2013. She continued her pursuit of education at Gadsden State Community College. Tinia was a loving daughter, sister and aunt who was passionate with love and fire driven by her outspoken spirit. Tinia was an avid Roll Tide Fanatic. Her wonderous personality could not be contained, she yearned to travel and explore all the world has to offer. Her love of humanity was always foremost with the true belief that she would save the world. On Tinia's journey she became the proud auntie of Makayla Miller and Chloe Meadows. She was a productive member of America's Automotive Industry at WKW, a helpful Walmart associate and at the untimely date of her departure she was employed with Eissmann Automotive. Tinia was called home at the early age of 26 on the evening of November 28, 2021 as she was surrounded by the love of family and friends while under the care of UAB Hospital in Birmingham, Alabama. Once gaining her heavenly wings, she joined her grandparents, Mrs. Everline Richey Duncan and Mr. Nathaniel Johnson, Mr. Julius Cook, Mrs. Alonia Johnson, Mrs. Mildred Cook, Mrs. Mary Ann Sillmon Cook and Mr. Harold Lindbergh Cook, uncles, Mr. Rodney Cook and Mr. Robert Rivers, Jr. She leaves to mourn and cherish all her fun loving memories her adoring and caring mother, Luverne "Tina" (Edward Wade) Johnson; her endearing father, Marty L. Cook; her protective and loving sister, Tierra Cook; her nieces, Makayla Miller and Chloe Meadows; her loving grandmother, Mrs. Clodeen Johnson; her doting aunts, Shawanda (Terry) Millender, Felicia Johnson, Mary J. Johnson-White and Harriet Wilson; her protective uncles, Leondric Johnson, Terrence Johnson and Tracy (Blanca) Cook, Ravon Duncan; her forever friend, Kiyandria O'Neal; her special friends, Kaycee, Briana and Shanantica; special daughter, Aubrianna Williams (daughter of Mr. Williams); a host of Godchildren, other relatives and friends. "The Memory of Those We Love Stays in Our Hearts Forever"

Luverne "Tina" Johnson and Marty L. Cook blessed the world with the birth of Tinia Adjan'ea "Nia" Cook on July 7, 1995, a bubbly and joyous baby girl with a smile that made the sun envious and laughter that was completely infectious in Talladega,... View Obituary & Service Information

The family of Ms. Tinia Adjan'ea "Nia" Cook created this Life Tributes page to make it easy to share your memories.

Send flowers to the Cook family.