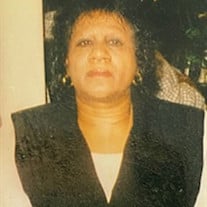 Tinnie “Tina” Freely Brooks was born to the late James Edward Freely and Evelyn Williams Freely on June 11, 1941 in Lee County, Alabama. Tina confessed Christ at a young age and became affiliated with a Seventh Day Adventist Church in Montgomery, AL. Later, as an adult, Tina joined the Jacob’s Chapel C.M.E Church in Talladega, AL where she was a faithful, lifelong member.  Tina attended the Alabama School for the Blind where she met and married the love of her life, Mr. Bobby Lee Brooks.  From their union, two children were born: a daughter, the late Vanessa Denise Brooks Porter and a son, Reginald “Batman” Brooks. Following the untimely death of her daughter, Tina became the surrogate mother of Vanessa’s three children (Erika, PJ, Jas) whom she affectionately called her “second set of children.” Tina had a long career as a master seamstress with the Alabama Institute of Death and Blind (AIDB) until her retirement on August 1, 2002. Tina invested her life as a servant of others, often assisting visually impaired neighbors and friends with completing daily tasks and with basic living skills. Tina chose to serve the Lord through good works and through song. She remained an active member of the Jacob Chapel’s choir. She will be remembered as a loving mother, devoted grandmother, and lifelong servant of God.  Tina received her wings on February 12, 2021. She was preceded in death by her husband, Bobby L. Brooks, daughter Vanessa Denise Brooks Porter; parents, James and Evelyn Freely; sisters, Carolyn Freely, Bernice Kennedy, Elizabeth Gresham; and brother, James Freely, Jr.    Tina is survived by her son, Reginald (Margaret) Brooks; the grandchildren she raised as her own, Erika (Roderick) Porter Cole, Patrick (Ebony) Porter Jr., and Jasmyne Porter Branch; sisters, Ida Mae Freely, Betty Gholston, and Virginia Sayles; grandchildren, Ryan Brooks and Rochelle Brooks; great grandchildren Jhovi and Jhoss Cole, Ava Porter, Noaa Branch, and Isaiah Brooks; a special longtime friend, Abraham L. Mathis; and a host of nieces, nephews, other relatives, and friends.  The family of Tina Brooks wishes to express their sincere appreciation for all the prayers, flowers, condolences and many other expressions of sympathy during the illness and passing of our beloved Tinnie.

The family of Mrs. Tina Lee Brooks created this Life Tributes page to make it easy to share your memories.

Send flowers to the Brooks family.