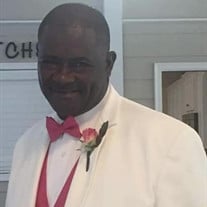 Terry's earthly journey began on September 17, 1964, the parentage of the late Mr. Norman Draper and Mrs. Luella Lee Swain in Talladega, Alabama. At an early age, Terry, a beloved husband, father, son, and brother accepted Christ as his Lord and Savior and united with Bethel Baptist Church in Alpine, Alabama where he was a member of the church choir and the male chorus. Terry continued working in the Lord's vineyard and in June 2021, Terry was ordained as a deacon serving faithfully until his demise. As a child, Terry was educated in the Talladega County School system and would later become a 1982 graduate of Talladega County Training School, known today as Talladega County Central High School. Terry was an avid sportsman and a devoted Alabama "Roll Tide" Football Fan. Along Terry's life's journey, he became the father of a beautiful baby girl name Percee Danielle Swain McCallam. Later in life he reunited and fell in love with his childhood sweetheart, Emma Swain, who became his soulmate and wife on September 16, 2017, when they were united in Holy Matrimony. Terry was very affectionate and compassionate when it came to his family and friends. He enjoyed entertaining his friends, playing cards, fishing cooking, cutting grass, and helping people in the neighborhood; and if you knew Terry, you had to know he was a big talker. Terry's love for people never allowed him to meet a stranger. He loved everybody and everybody loved Terry. He always kept you laughing and was full of energy and enthusiasm. Not only did he love entertaining family and friends, but he also loved his wife, daughter, grandson and extended bonus family. Terry will truly be missed by all the hearts he touched and joyful spirit he brought to everyone he encountered. On Tuesday, September 7, 2021, Terry serenely answered the call of his Master while in the comfort of his home and boarded the train to glory joining his father, Norman Draper, brother, Christopher Lee and grandparents, Edward Lee Swain and Melissa Swain, Lune Draper, Jr. and Annie Louise Draper. Although Terry's unexpected departure has left many broken hearts that only God can heal, his love and fun memories will always be remembered and cherished by his loving and devoted wife Emma President Swain, daughter, Ms. Percee Danielle Swain McCallam; mother, Luella Lee Swain; bonus daughter, SaQuandra Taylor; bonus son, Jontavious President; two sisters, Dionne Draper and Valerie Swain Moore; three brothers, Vernon Draper, Jerome Draper, and Kedric Draper; one cousin/brother, Kevin Swain; one grandson, Zion L. McCallam; four bonus grandchildren, Devonta Cunningham, Keyaries Cunningham, Sakiya Cunningham and Nassir President; and a host of aunts, uncles, cousins, other relatives, and friends.

The family of Terry Swain created this Life Tributes page to make it easy to share your memories.