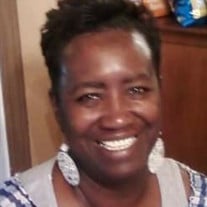 On August 12, 1952, in Talladega, Alabama, the late Joe Tuck and Wilma Lee Taylor Tuck welcomed to the world a baby girl and she was given the name Shirley Tuck. Early in life, Shirley accepted the Lord as her personal Savior at Mt. Zebulon A.F.M. Church of God under the leadership of Elder Mack and Elder Minnie McCluney where she was a faithful member serving as the church secretary, Sunday School Teacher and Usher. Later in life, Shirley remained a loyal servant of God when she united with Little Jerusalem Church of God #2 under the leadership of Bishop Randolph Scott until God called her home. Shirley received her formal education in the Talladega City School System and was a graduate of Talladega High School Class of 1971. Later in life, Shirley decided to further her education and enrolled at Miles. In 1993, Shirley became a graduate of Jacksonville State University. She worked several jobs while in school to take care of her three kids, sometimes if walking to work was her only means of transportation, that is what she did. She worked in domestics for many years from housekeeping to caring for patients in the comfort of their home. After 28 years of being a devoted and dedicated employee at Citizen's Baptist Medical Center, Shirley retired as a G.I. Tech in the one-day surgery department. Shirley was the description of a devoted, loving and caring mom. Shirley really enjoyed traveling, serving the Lord and working in the church. She loved attending church conventions and marriage retreats and traveling to Florida with her A.F.M. family and her road dog partner Sister Beavers. She also enjoyed going to water aerobics with her late granddaughter, LaTaucha; but just sitting on the front porch on a pretty day was good enough for Mrs. Shirley. On Thursday evening, September 23, 2021, while under the care of Brookwood Citizen's Baptist Medical Center Shirley received a call from her Master saying, "Well Done Thy Good and Faithful Servant". Once accepting her Master's call, Shirley accepted her heavenly wings and boarded the train to glory joining her husband, Charles Ward, parents, Joe and Wilma Tuck, granddaughter, LaTaucha Bishop and sister, Vernell Rhoden. Leaving behind to cherish all Shirley's love and precious memories are her children, two daughters, Felicia (Willie) Garrett of Talladega, Alabama and LaQuita Harmon of Pensacola, Florida; one son, Shadrach M. Harmon, Jr. of Birmingham, Alabama; two sisters, Angela T. Keith of Talladega, Alabama and Janice Tuck of Detroit, Michigan; five grandchildren, Jaylon, LaZabien, Janiya, Dianna, and Kyen; and a host of nieces, nephews, cousins, other relatives and friends.

On August 12, 1952, in Talladega, Alabama, the late Joe Tuck and Wilma Lee Taylor Tuck welcomed to the world a baby girl and she was given the name Shirley Tuck. Early in life, Shirley accepted the Lord as her personal Savior at Mt. Zebulon... View Obituary & Service Information

The family of Mrs. Shirley D Ward created this Life Tributes page to make it easy to share your memories.

Send flowers to the Ward family.