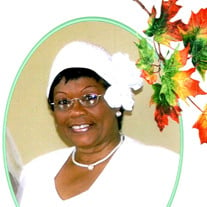 On June 4, 1941 in Talladega, Alabama, Willie Robert Curry and Rosa Lee Carlisle Curry welcomed to the world a beautiful bubbly baby girl and gave her the name Rosa Mae. At an early age, Rosa committed her to life Christ and united with Ebenezer Baptist Church where she was a faithful servant of God working and worshipping diligently until later in life deciding to amalgamate with Mt. Canaan Baptist Church. Rosa loved the Lord and enjoyed being a dedicated worker in his vineyard until her health began to fail. This was a proven fact by her actions and immeasurable certificates and awards of recognition while being a member of the Inspirational Choir, serving as President of the Missionary Ministry, President of the Nurses Guild, President of the Matron Circle #2, Bible Study Teacher, and a dedicated and faithful adult, youth, and primary Sunday School Teacher. Rosa's formal education was received in the Talladega City School System where she was a graduate of Westside High School Class of 1970. Rosa was destined to become an educator with distinction. She married and started her family during her sophomore year and had to leave school between giving birth to her four lovely children until her graduation in 1970. Mrs. Rosa Mae Curry Wallace was living confirmation that education was the key to success despite any barriers that may occur while on your journey in life. She wanted to inspire all youngsters and let them know to complete their education and let nothing be a hinderance to them. Mrs. Wallace enrolled at Talladega College in 1970 and received her Bachelor of Arts in Elementary Education in 1974. She soon began working towards her Master's Degree at Jacksonville State University, but had to delay her studies and began raising her second family of three beautiful grandchildren due to the loss of her daughter, Angelecia. For Mrs. Wallace, delay never meant denial to her as her yearning for knowledge was demonstrated when she returned to Jacksonville State University and received her Master of Science in Education in 1996. Not only was Rosa a member of Kappa Delta Pi, an International Honor Society in Education, Alpha Gamma Honor Society, Elks College City Temple #823, AEA, NEA and various other public organizations; she served as Vice-President of Talladega City Education Association, Chairperson for the hospitality committee of the Westside-Drewry Alumni Association, President of the Fraternal Order of Police Ladies' Auxiliary Lodge 28, 1993 Alabama State Teacher of the Year, 2004 Alabama Daughter Elk of the Year, and numerous other certificates, awards and recognitions. Mrs. Wallace was a very smart and educated mentor who spent countless hours in the classroom with her students while continuing to further her education. Before her final retirement, Mrs. Rosa Mae Curry Wallace had devoted years of excellence in education in the Talladega City School System and Tri System Learning Center Alternative School from 1974-2003. Admitting to being a stern and strict disciplinarian while teaching, she would often shower her students with love and let them know they were cared for. Working with children was Rosa's life. In Rosa's spare time, she enjoyed sewing, quilting, arts and crafts, mentoring, spending recreational time with her children, and working on the volunteer committee at Brookwood Citizen's Baptist Hospital. On the evening of Sunday, August 22, 2021, after eighty blessed years on this earthly journey, God called for Rosa to accept her heavenly wings and board the train to glory while surrounded by loved ones in the consolation of her home under the care of New Beacon Hospice. Upon boarding that glory train, Rosa was welcomed home by her parents, Mr. Willie and Mrs. Rosa Lee Curry, her daughter, Angelicia Wallace Toyer, brother, Johnny C. Curry, and sisters, Willie Lee McElrath, Annie Pearl Brown, Mable White and Joyce Ann Griffin. She leaves to cherish her loving memories; two sons, Wilby Wallace III and Walter Fitzgerald Wallace; one daughter, Pamela Yvonne Wallace (Walter) Dates; three grandchildren she raised as her children, LaTorry (Denise) Wallace, Tamara Wallace, and Angelicia Wallace Stewart; her favorite niece, Gloria Jeannie (Curtis) Pettaway of Long Island, New York; five grandchildren; Veronica Wallace, Danielle Lindsey, Malcolm LaRay Lindsey, Walter Fitzgerald Wallace, Jr., and Kennedy S. Glover; and a host of nieces, nephews, other relatives and friends.

On June 4, 1941 in Talladega, Alabama, Willie Robert Curry and Rosa Lee Carlisle Curry welcomed to the world a beautiful bubbly baby girl and gave her the name Rosa Mae. At an early age, Rosa committed her to life Christ and united with... View Obituary & Service Information

The family of Rosa Wallace created this Life Tributes page to make it easy to share your memories.