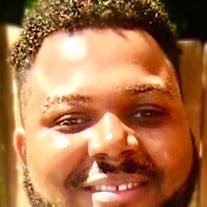 Mr. Rodney "TO" Oden began his earthly journey on October 9, 1986, to the union of the Rodney S. Oden and Angela Chatman Oden in Anniston, Alabama. As a youth, Rodney attended Bibleway Church of God in Sweet Rock (Oxford, Alabama) and continued serving God as an adult when he accepted Christ as his Lord and Savior and untied with Thankful Baptist Church in Anniston, Alabama. Rodney received his formal education in the Talladega County School System and was a 2005 graduate of Munford High School. He working career began soon after and he later became an OTR Truck Driver for over six years with Gold Star Logistics his final job at the time of his demise. Because he was a hardworking young man, Rodney also landed a second job working with Door Dash Delivery, which was what he enjoyed doing and unfortunately, this was what Rodney was doing at the time of his death; but his heart and passion was with his family. He loved his family, and his prize possessions were his two nephews, Frankie and Tyler. Rodney was loved dearly by his family and friends. Along Rodney's life journey, he met his soulmate, Natosha Norwood, and together they became one by being united in Holy Matrimony and enjoying 4 beautiful years of soulful bliss and love. Although the angel God had blessed to this union was chosen to be a beautiful flower in his heavenly garden, Rodney and Natosha kept the faith and continue to stay strong knowing God makes no mistakes. Affectionately known by many as "Tavaris" or "TO", Rodney was well known for the love he had for his entertainment as a DJ, playing basketball, and the Alabama Crimson Tide. When he wasn't working and loving on his family, you could often find him swimming or on his phone playing many different mind mastered games..... Rodney answered the call of his Master on Thursday, July 15, 2021, for his eternal meeting Leaving behind all the troubles of this sinful, evil world and joining his heavenly family of beloved grandparents Earlene "Sonny" Oden and Harry Jenkins and a special uncle, Hiram Gregory Chatman. Leaving behind to cherish all his love and precious memories are: a loving devoted wife of 4 years, Natosha Norwood Oden; parents, Rodney S. Oden and Angela Chatman Oden; daughter, Ty'liyah Chanel Oden; sister, Erica (Frankie) Hearn of Las Vegas, NV; grandparents, Henry Chatman and Flossie Chatman; two special nephews, Trey and Tyler Hearn; a dear cousin that was like a brother, Michael Paul McLeod; and a host of aunts, uncles, cousins, other relative and friends. Rodney will truly be missed by all the lives he has touched.

Mr. Rodney "TO" Oden began his earthly journey on October 9, 1986, to the union of the Rodney S. Oden and Angela Chatman Oden in Anniston, Alabama. As a youth, Rodney attended Bibleway Church of God in Sweet Rock (Oxford, Alabama) and continued... View Obituary & Service Information

The family of Mr. Rodney Tavaris Oden created this Life Tributes page to make it easy to share your memories.

Send flowers to the Oden family.