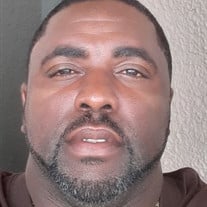 Rico Jervani Harrison was born on September 1, 1978 to the union of Occie and Cathy Harrison in Goodwater, Alabama. Mr. Harrison accepted Christ at an early age at Pleasant Home Baptist Church in Goodwater, Alabama. He later united with Candlelight on the Hill in Goodwater where he served on the deacon board. Once making Talladega his home, Mr. Harrison rededicated his life back to Christ at Morning Star Missionary Baptist Church where he was a member of the choir and a faithful servant of God until his passing. Mr. Harrison attended Bibb Graves High School in Clay County and Community College in Montgomery, Alabama. Once completing his education, he began his working career with Sumter Utilities for 20 years and at the time of his demise he was employed with Powerline Services. As Rico traveled through this walk of life, along the path he met his soulmate and the love of his life, Ms. Yolanda Renae Hester, who later became his wife when they were united in Holy Matrimony, and to this union, two baby girl were born; but Rico and Yolanda had the blessing of caring for five loving children. Rico loved his family dearly and the children were the joys of his life. On Saturday, October 16, 2021, while under the care of Citizen's Baptist Medical Center, Rico was called home for his eternal rest joining his brother, Eric Harrison and grandparents Willie K. and Mildred Leonard. Although the unexpected departure of Mr. Rico Jervoni Harrison has left many broken hearts that only God can heal, his love and memories will always be remembered and cherished by his loving wife, Yolanda Renae Hester of Talladega, Alabama; two sons, Alton Hill, Jr. and Trevion Hester of Talladega Alabama; three daughters, Trinity Hester, Rihanna and Armani Harrison of Talladega, Alabama; his loving parents, Mr. Occie and Cathy Harrison of Goodwater, Alabama; sister, Angela Thomas of Virginia; his in-laws, Shenick (Cassandra) Hester Sr. and Mary Ragland of Talladega, Alabama; his brothers-in-law, Stephen (Octavia) Hester of Murfreesboro, Tennessee and Shenick Hester, Jr. of Talladega, Alabama; sisters-in-law, Sheneka (Quinton) Crawford of Talladega, Alabama, Shanyail Hester of Tuscaloosa, Alabama, and Taneya Harrison of Alexander City, Alabama; special friends, Paul Needle, Tim Barker, and Kevin Kelly; and a host of nieces, nephews, aunts, uncles, cousins, other relatives and friends.

The family of Mr. Rico Jervoni Harrison created this Life Tributes page to make it easy to share your memories.

Rico Jervani Harrison was born on September 1, 1978 to the union...

Send flowers to the Harrison family.