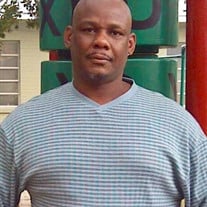 On July 23, 1970 in Talladega, Alabama, Randy Curry was the seventh child born to the union of Carson Curry and Shirley Richardson Curry. Randy accepted Christ at an early age and united with Morning Star Missionary Baptist Church. He received his formal education in the Talladega County School System and was a member of the 1988 graduating class of Winterboro High School. Affectionately known as "Zonka" by his family and friends, Randy was loved by many. When he heard the name "Zonka", he was quick to answer. He had a passion for cooking and at the time of his passing he was a chef in Fall River, Massachusetts. Not only did Randy have a passion for cooking, but he also enjoyed being a carpenter and mechanic which is why he was called a jack of all trades when it came to helping others. He also became known as "Mr. Fix It" and did not mind assisting when help was needed. Randy will be missed immensely by all the lives he has touched. On January 31, 2022, Randy Curry departed this walk of life while residing in Fall River, Massachusetts. He was preceded in death by his father, Carson Curry, grandfathers, Walter Richardson and Otis Curry, grandmothers, Emma Lou Richardson and Mary Alice Curry, three uncles, one aunt and one brother-in-law. Randy leaves to cherish his precious memories his son, Jamar (Tysherra) Embry of Winter River, Florida; daughters, Martika Kidd of Gadsden, Alabama and Bella of Fall River, Massachusetts; mother, Shirley J. Curry of Talladega, Alabama; brothers, Anthony (Adrienne) Curry of Kansas City, Missouri, Jeffery (Shaquita) Curry of Talladega, Alabama, Ricky Curry of Las Vegas, Nevada, Dexter (Norman) Curry of Talladega, Alabama; sisters, Sharon Ragland of Talladega, Alabama, Angela Curry and Margaret (Sheldon) Barclay of Talladega, Alabama; five grand-children, three uncles, eight aunts, and a host of nieces, nephews, other relatives and friends.

On July 23, 1970 in Talladega, Alabama, Randy Curry was the seventh child born to the union of Carson Curry and Shirley Richardson Curry. Randy accepted Christ at an early age and united with Morning Star Missionary Baptist Church. He received... View Obituary & Service Information

The family of Randy Curry created this Life Tributes page to make it easy to share your memories.

Send flowers to the Curry family.