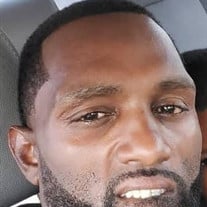 Quincy Lamar Stamps began his earthly journey on October 19, 1982 to the union of Beverly “Mammy Kaye” Stamps (Steve) Morrison and Samuel White in Talladega, Alabama.   Quincy enjoyed living in Talladega during his childhood years which is when he also accepted Christ as his Lord and became a member of Jacob’s Chapel CME Church, but during his adolescent he moved to Indianapolis with his mother and brother and this would become home for him. He attended Emmerich Manuel High School where he was a member of the 2002 graduating class. Quincy excelled in sports throughout his school years and received many academic and athletic awards.   Quincy, affectionately known as “Que” was loved and well known by many in Talladega and Indianapolis. He was always laughing and enjoyed spending time with his family and friends. He never met a stranger and was always full of energy and excitement. He would spend countless hours with his friends and family both in Talladega and Indianapolis entertaining, playing cards, bowling, and cooking out. You name it, Quincy was gain for it.  Unexpectedly on the evening of February 2, 2021, while doing what he loved to do, which was enjoying time with his friends bowling, Quincy received an unanswered call and suddenly fell into a deep sleep. Hours later he answered his final call from the Master to accept his heavenly wings to join his brother, Cornelius Stamps, in his new eternal home leaving behind the troubles of this sinful, evil world. Along with his brother, he will also be joining his grandparents, Mr. Henry Stamps, Sr. and Mrs. Elsie Stamps. Quincy will leave a legacy of love behind to be cherished by his two sons; Quincy Lamar Stamps, Jr. and Brycen Jamal Stamps; mother, Mrs. Beverly (Steve) Morrison; father, Samuel White; his sisters, Chavalya (Jacobey) White and Jennifer (Dwight) White; his brothers, Kimani (Latrina) White, Derrick (Tina) Harris, Karlous Player and Emanuel White; nieces, Kunisha Stamps, Brianna Stamps, Alexis Stamps, Cortney Stamps, and Keyera Abron; three aunts, Mary Reeves, Flora (Tom) Hunley, and Brenda (Cheyenne) Curry; one uncle, Kenneth (Kathy) Stamps; special cousins, Tracy (Jeffrey) McCluney, Justin Hunley, Kaneashia (Larry) Stamps, Markeise (Bernard) Twymon, Giovante Hunley, Shaun Stamps, and LaDerrick Stamps; extended family in Indianapolis and a host of other relatives and friends.

The family of Mr. Quincy Stamps created this Life Tributes page to make it easy to share your memories.

Send flowers to the Stamps family.