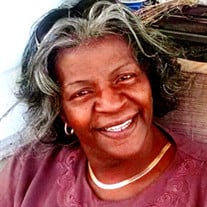 On August 16, 1960 in Talladega, Alabama, the late Mrs. Mary Cunningham Walker and Mr. Leon Walker welcomed to their union a beautiful baby girl named Phyllis. She was loved by many people, especially her five loving children whom she took great care and gave all the motherly love a mother could give. Phyllis loved playing cards with spades being her card game of choice. On her phone, she was a champ at playing solitaire. She was very family oriented, and she enjoyed entertaining her family, friends, and loved ones; however, her three grandchildren were her most prized possessions. You could often find Phyllis sitting on her porch drinking her tea, coffee or a Coca-Cola. During football season, there is no doubt that she is somewhere cheering on the Auburn War Eagles Football Team. She was cherished immensely by her family and all who knew her. Phyllis accepted Christ as her Lord and Savior at an early age and united with Lily Hill Baptist Church. She later began attending St. Mary Baptist Church under watchman ship under the leadership of Rev. Everett Kelly before returning home to Lily Hill Baptist Church. Later in life, Phyllis made Greater Ebenezer Missionary Baptist Church her final place of worship and fellowship where she remained a faithful member until her health begin to fail. She received her formal education in the Talladega City School System and was a graduate of Talladega High School. Phyllis continued her education at Gadsden State Community College earning an associate degree in Early Childhood Development. Before utilizing her skills in education, Phyllis was employed with Tyson Foods in Ashland and worked as a seamstress for Medline. Once completing her degree, Phyllis worked as a teacher's aide and substitute teacher in the Talladega City School System at several schools including Talladega Headstart, AIDB, Talladega High School and Zora Ellis Junior High School. On Tuesday, January 25, 2022, Mrs. Phyllis Francher Walker Shields, a beloved mother, grandmother, sister, and aunt transitioned peacefully from this earthly walk of life to her new eternal resting place when she answered the call of her Master saying, "Well Done My Good and Faithful Servant" while under the care of Brookwood Citizen's Baptist Medical Center in Talladega, Alabama. Greeting her with outstretched arms at those pearly gates of heaven was her mother, Mrs. Mary Walker. Phyllis's precious memories will forever be cherished and remembered by; her three daughters, Tyisha Shields, Jahonnie Shields and Anjelique Cameron; two sons, Jostin Shields and Devilin Cameron; three grandchildren, TaKyija Shields, Dreylon Shields and Janari Braxton; three brothers, Gary Walker, Hershel Walker and Al Walker; three sisters, Twyler Walker, Corliss Walker and LaKeshia Barclay; and a host of nieces, nephews, other relatives and friends.

On August 16, 1960 in Talladega, Alabama, the late Mrs. Mary Cunningham Walker and Mr. Leon Walker welcomed to their union a beautiful baby girl named Phyllis. She was loved by many people, especially her five loving children whom she took great... View Obituary & Service Information

The family of Phyllis F Shields created this Life Tributes page to make it easy to share your memories.

Send flowers to the Shields family.