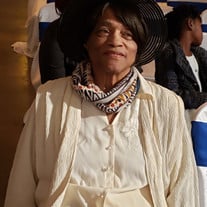 Peggy Lois Jordan Pryor was born to the union of Curtis Jordan and Della Shepard Jordan in St. Clair County, Alabama on July 4, 1940. Ms. Pryor confessed Christ at an early age and united with Greenfield CME Church in Cropwell, Alabama where she served as a faithful member until her demise. Peggy received her formal education through the St. Clair County School system. Upon completing her education, Peggy worked various jobs including Goldkist, Ingram Manor and St. Clair County Hospital where she cared for others before she decided it was time to retire and spend more time with family and friends. Peggy lived life to the fullest. She had the most infectious laugh that you could hear a mile away. Peggy was known by her family and friends for her great southern hospitality. If she's cooking, she would feed the neighborhood! You can stop by for a plate of her famous fish, dressing and potato salad and believe me...you would leave happier than you came. Peggy's warm and kind heart made it impossible not to love her. God's need for Peggy's infectious smile came on Thursday, September 2, 2021, when she received her wings to her heavenly home. Preceding Peggy in death were her parents, Curtis and Della Jordan, husband, Roosevelt Pryor, daughter, Tammy Pryor Adams, five sisters, Dollie Ann Swain, Mary Threatt, Rena Jean Brewer, Rosa Lee Truss and Sarah Ruttling and three brothers, Howard Jordan, Dallas Jordan and Benny Jordan. Peggy leaves to cherish her memory her children; Gary Jordan of Pell City, AL, Derryll (Gaye) Jordan of San Diego, CA; Vanessa Estell of Douglasville, GA; Dorothea Pryor, Keith Pryor, Johnny Moore and Maurio Pryor of Pell City, AL; ten grandchildren; seven great-grandchildren; special friends to the family, Buford Estell, Jr., Warren Anthony Adams and Timothy Bridges; and a host of nieces, nephews, other relatives and friends.

The family of Peggy Pryor created this Life Tributes page to make it easy to share your memories.

Peggy Lois Jordan Pryor was born to the union of Curtis Jordan...

Send flowers to the Pryor family.