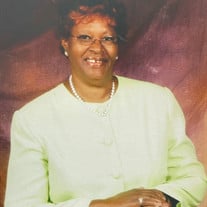 On June 30, 1935 in Talladega, Alabama, Pauline (Wilson) McGhee was born to the union of the late Mr. Bennie Wilson and the late Mrs. Annie Bell (Cook) Wilson. Pauline confessed Christ at an early age and united with Africa Missionary Baptist Church, where she remained a faithful member until her health failed. For many years, Pauline actively served as a member of the choir and the nurse's guild. She received her formal education in the Talladega County School System and attended Robert Russa Moton School. Pauline's professional career led her on a variety of paths, first beginning at a young age when she became employed at Camp Mack. She later worked as a home domestic until she decided to try factory work. Pauline was employed with both, Bemis Bag Manufacturing Co. and Wehadkee Yarn Mill. When the factories closed, Pauline's professional career led her in a different direction when she received some nursing training and started working at Talladega Nursing Home, known today as Talladega Health and Rehab Center. Her final employment was as a houseparent on the Blind Campus at Alabama Industries for the Deaf and Blind (AIDB) in Talladega, which is where she retired from after more than 25 years of dedicated service. She was loved immensely by her kids and co-workers there. Pauline affectionately known as "Pauly" by her immediate family, was blessed with a journey of more than 86 beautiful earthly years. Along this journey, Pauline was blessed with two loving children, Polly Ann Wilson and James Lewis Wilson. She would later meet and marry her soulmate, Mr. Willie George McGhee, and together they shared a love story of over 50 years. Pauline loved "t-a-l-k-i-n-g" and having friends and family around for meals and fun. She enjoyed spending time with her grandchildren and great-grandchildren, but we cannot leave out one of the joys of her life, her pet dog, CAM. Sometime on Monday, April 4, 2022 Pauline closed her eyes one last time went to sleep as she boarded the train to glory transitioning from this blessed 86 year earthly journey to her new heavenly home for eternal rest with the Lord. She was reunited with her husband of over 50 years, Willie George McGhee; her beloved son, James Lewis Wilson; her parents, Bennie and Annie Wilson; and her brothers: Vester Lee Wilson, James Woodrow Wilson, William Wilson, David Wilson and Lovell Wilson; her sisters: Ester B. Higgins, Annie B. McGhee, and Bennie Lee Garrett; four sisters-in-law and six brothers-in-law. Pauline was the last surviving sibling of nine and she will truly be missed not only by family, but all the lives she has touched in some way along her 86-year journey. Pauline's legacy of love and precious memories will forever be remembered and cherished by her daughter, Polly Ann (Mansfield) McGhee; her grandchildren, Pamela M. Wilson and Michael (Kendra) McGhee; her great-grandchildren, Landon, Carter, and Finley; a special nephew, Will (Betty) Higgins, Jr.; step-grandchildren, Thyreshia, Shonda, Brian Terrell, Tiffani, Tia and Erick; her daughter-in-law, Beverly Wilson; sisters-in-law, Lillian McGhee and Velberta McGhee; brother-in-law, Joe Hawkins; her close friend, Mrs. Mary Swain and a diligent neighbor, Mrs. Ida Lee McKenzie, both who kept regular check on Pauline; the best home health caretaker one could have, Mrs. Alice F. Nix; and a host of nieces, nephews, cousins, other relatives, friends and co-workers.

The family of Pauline McGhee created this Life Tributes page to make it easy to share your memories.

Send flowers to the McGhee family.