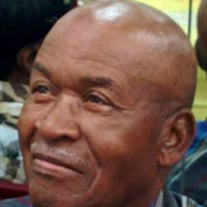 Not sure what to send?

Mr. Few's ninety-one-year earthly journey began on October 27, 1930 when he was born to the late Johnny Few and the late Josephine Heard Few in Elmore County, Alabama. At an early age, Mr. Few accepted Christ and united with Bethel Methodist Church in Elmore County. The family relocated to Clay County in the late nineteen forty's and he continued worshipping the Lord and became a member of Pleasant Grove United Methodist Church where he remained a faithful member until his health began to fail. Affectionately known by his family as "Nay", he received his formal education in the Clay County School system and attended Ashland Jr. High School. Mr. Few later joined the U.S. Army dedicating his service to the country for over twenty years. Mr. Few worked as an orderly at Clay County Nursing Home for over 30 years and as a custodian for the Hulls and Morris families in Ashland until his health fail. Nay spent lots of time on the fishing banks and watching football. He was a true diehard Alabama Roll Tide fan; but he also loved his WESTERNS. On Thursday, January 13, 2022, while in the care of Clay County Nursing Home in Ashland, Alabama, Mr. Nathaniel Few peacefully accepted the call of his Master and transitioned from this earthly home to his eternal resting place. He was welcomed home by his parents, Mr. and Mrs. Johnny and Josephine Few, his sisters and brothers. Mr. Few leaves to cherish his precious memories his wife of seven years, Mrs. Mamie Simmons; two sons, James (Regina) Thomas of Talladega and Antoine (Monica) Hale of Lineville; grandchildren, Kaden, Antoine Jr., Mariah, Isaiah, Jereemiah, Shacora, Tiaerria, Marcus, Tyaris, Nancy and last but not least, Deseree ; two very caring and loving sisters, Nell (Clarence) McKenzie of Talladega and Jane (Jewell) Foster of Montgomery; and a host of nieces, nephews, cousins, other relatives and friends.

The family of Nathaniel Few created this Life Tributes page to make it easy to share your memories.

Send flowers to the Few family.