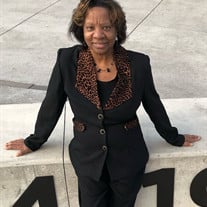 Nancy Tillman Weaver was born in Colorado Springs, CO, on April 10, 1957, to Susie Tillman and Henry Tillman. Before moving to Alabama, she grew up in Pennsylvania, Alaska, Washington, DC, Maryland, and Kentucky. She fell in love with the state of Alabama and would take pride in saying, "What's not to love about this place." She loved the Southern accents, climate, and beauty of the state. She resided in her "Sweet Home, Alabama" until her passing. Nancy had a passion for drawing. She drew cartoon characters and celebrities. She loved collecting photos, cooking, and singing. One song she often sang was "Goin' Up Yonder" by Tramaine Hawkins. Nancy had a beautiful smile and a unique laugh. She never forgot a birthday, always sending birthday cards early (super early!) to ensure they were received on time. A funny childhood memory was how, when her siblings were spending their allowances on junk food and clothes, she was loading up on Oil of Olay. Nancy worked at Fort McClellan Dining Facility for several years, serving the military community. Her three sons were the joy and focus of her life. She took great pride in being a mother and a grandmother. As she approached her day of departure, she experienced physical, emotional, and spiritual challenges. The message she left was, "Repent!"...especially if you are "Going Up Yonder." (Jeremiah 7.) Nancy was preceded in death by her beloved mother, Susie Tillman, her brother, Barrett Tillman, Sr., and her sister, Priscella Tillman. She leaves to cherish her memory her father, Henry Tillman, three sons and their families, Antonio Almon (Sharon) of Anniston, AL, Christopher Tillman (Ashley) of Anniston, AL, and Cornelius Tillman (Tabita) of Dallas, GA; siblings, Henry (Lea) Tillman, Jr. of Wetumpka, AL, Costella (Calvin) Wiley of Essex, MD, Velma Tillman of Indianapolis, IN, Brenda (Kelvin) Simms of Appleton, WI, and Tina Tillman of Harvest, AL, along with a host of grandchildren, nieces, nephews, aunts, uncles, and cousins.

Nancy Tillman Weaver was born in Colorado Springs, CO, on April 10, 1957, to Susie Tillman and Henry Tillman. Before moving to Alabama, she grew up in Pennsylvania, Alaska, Washington, DC, Maryland, and Kentucky. She fell in love with the... View Obituary & Service Information

The family of Nancy T Weaver created this Life Tributes page to make it easy to share your memories.

Send flowers to the Weaver family.