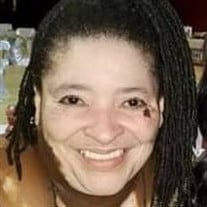 On July 28, 1958 in Talladega, Alabama, the late Mr. Robert Lee Russell, Sr and the late Eliza Maude Turner Russell welcomed to their union one of fifteen children, a beautiful sparkling baby girl named Nancy. At an early age, Nancy accepted Christ as her Lord and Savior and united with Shady Grove Baptist Church where she remained a faithful member until her health begin to fail. She received her formal education in the Talladega County School System and was a graduate of Munford High School. Soon after graduation, Nancy began her military career joining the US Army and serving her country faithfully for more than six years before being honorably discharged. Nancy was a member of the last WAC class to graduate from Fort McClellan Army Base in Fort McClellan, Alabama. After returning from the military, Nancy made Ft. Monmouth, New Jersey her home for many years working as an operator before returning to Alabama. Along Nancy's earthly journey she became the mother of two loving children, Nakeisha and Curtis. She was loved by many people, especially her two loving children whom she took great care and gave all the motherly love a mother could give. Known by family and friends as "PeeWee", she was cherished immensely by her family and all who knew her. Nancy enjoyed watching movies and going to the movies but was known as "The Lifetime Lady". She loved "Lifetime" and "Young and the Restless". Her greatest talent was singing, which was something she always found joy in doing. On Thursday, February 17, 2022 Mrs. Nancy Russell Sloan, a beloved mother, grandmother, sister, and aunt transitioned peacefully from this earthly walk of life to her new eternal resting place when she answered the call of her Master saying, "Well Done My Good and Faithful Servant" while in the comfort of her home in Birmingham, Alabama. Greeting her with outstretched arms at those pearly gates of heaven were her parents, Robert and Eliza Russell, Sr., brothers, William Russell, Sr., Donald Russell, Sr., Robert Russell, Dave Russell, Sr. and Woodrow Russell, sister, Carolena Hughley and aunt, Ms. Rosie Lee Turner. Nancy's legacy of love and memories will forever be cherished and remembered by: her husband, Curtis Sloan, Sr.; her two children, Nakeisha Russell and Curtis (Shaunta) Sloan, Jr.; bonus daughter, Lydia Sloan; two brothers, Tommie (Mary) Russell of Munford, Alabama and Jerry (Carol) Russell of New Jersey; six sisters, Ethelena McNeal, Robbie (Leroy) Angel and Brenda Johnson all of Anniston, Alabama, Lola Madden and Margaret Estelle both of Munford, Alabama and Linda Doobay of Maryland; fourteen grandchildren, Shaquille, Rahmel, Toddekeia, Katia, Jamyah, Joshua, Jazmine, Kamonie, Malachi, Arianna, Immanuel, Elijah, Shauntia and Jeremiah; four great-grandchildren, Roan, Kahlani, Eris and Arlo; and a host of nieces, nephews, other relatives and friends.

The family of Nancy Sloan created this Life Tributes page to make it easy to share your memories.

Send flowers to the Sloan family.