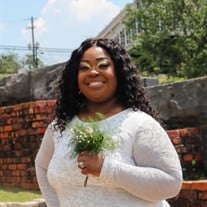 Mrs. Melvisha H. Mallory was born to the parentage of Mary Jo Scales and Melvin Cochran in Talladega on July 21, 1980. At an early age, Melvisha accepted Christ as her Lord and Savior and united with Mount Pilgrim Missionary Baptist Church. Melvisha received her childhood and adolescent education in the Talladega County School System and was a 1998 graduate of Winterboro High School. She immediately decided to further her education by enrolling at Central Alabama Community College and earning a degree in nursing as an LPN with the class of 1999. Melvisha was a determined young woman striving to make it to the top and in 2008, she did just that when she earned her RN degree in nursing from Central Alabama Community College. Upon receiving her degrees, she initially began her working career as an LPN and later as an RN at Coosa Valley Medical Center in Sylacauga, Alabama and Julia Tutwiler Prison for Women in Wetumpka, Alabama. Melvisha loved her nursing career and at the time of her unfortunate passing, she was a Charge Nurse at Coosa Valley Medical Center and also still working at Julia Tutwiler Prison for Women. Along Melvisha's life journey, she was blessed with two beautiful daughters in her union with Cedric Garrett. She later met and married her soulmate, Mr. Quadaya Stephan Mallory. Although she treated everyone like family, her daughters were her most prized possession. She was a proud mother who enjoyed making sure her daughters had all the resources they needed throughout their childhood and adolescent years giving them all the support a mother could give. She always loved, provided, and cared for her family without hesitance. Melvisha enjoyed crossword puzzles, playing softball, candy crush saga, and playing spades with her family. She was a fun-loving and kind-hearted wife, mother, daughter, sister, aunt, cousin, niece, and friend that was cherished immensely by her family and all who knew her, but the jewels of her life were her beautiful girls, Amiya and Taniya. Melvisha gained her heavenly wings after accepting her Master's call on Saturday, June 19, 2021 at the age of 40 in York, Alabama joining her beautiful mother, Mary Jo Scales. Melvisha will forever be cherished and remembered by her husband, Quadaya Stephan Mallory; two beautiful daughters, Taniya Garrett and Amiya Garrett; her father, Mr. Melvin (Wilma Dean) Cochran; stepfather, Martin Fitzgerald (Priscilla) Taylor, Sr.; one sister, Mieesha Hutchinson; one stepsister, Teskalonia McMillian; two brothers, Mar'Terrian Hutchinson Martin Taylor, Jr.; four half-brothers, JaCoby Hutchinson, Anthony (LaShayla) Cochran of Sylacauga, Dontavious Brown, and Octavous Thomason of Akron, OH; one stepbrother, Justin Player; three aunts, Patricia Pointer, Phyllis (Gregory) Beck, and Olivia Hawkins; three uncles, John (Martha B) Curry, Bruce Hutchinson, Issac (Juliet) Curry, and John (Martha B) Curry; best friend since childhood, Katrina Morris; and a host of other relatives and friends. Melvisha will truly be missed by all the lives she has touched and people she has encountered. The unexpected departure of Melvisha has left many broken hearts that only God can heal.

Mrs. Melvisha H. Mallory was born to the parentage of Mary Jo Scales and Melvin Cochran in Talladega on July 21, 1980. At an early age, Melvisha accepted Christ as her Lord and Savior and united with Mount Pilgrim Missionary Baptist Church.... View Obituary & Service Information

The family of Mrs. Melvisha H Mallory created this Life Tributes page to make it easy to share your memories.

Mrs. Melvisha H. Mallory was born to the parentage of Mary Jo...

Send flowers to the Mallory family.