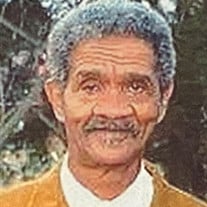 Deacon Melvin Higgins was one of ten children born to the union of the late John Higgins and Rosie Nell White Higgins in Talladega, Alabama on December 11, 1937. Deacon Higgins 83-year life's journey has truly been a blessing to everyone he has encountered. As a youth, Melvin united with Morning Star Baptist Church. He attended Lane Chapel Schoolhouse and later graduated from Ophelia S. Hill in Munford. During his adolescent, Melvin drove school bus #45 for Ophelia S. Hill until he graduated and continued driving for a year after his graduation. Melvin's next path on his earthly journey was to relocate and move to New Jersey where he became very active with his community government. Later in life, Melvin extended his family when he met his soulmate of 35 years, Mrs. Nellie McKinney Higgins and her three girls, Freida, Lucretia, and Jakima. He and Nellie became one when they were united in Holy Matrimony on November 10, 1999. Melvin loved his family, his church, and was loved by all that knew him. In the early seventies, Melvin decided to return home to Alabama and continue exploring this journey called life. With singing being a sincere passion of Melvin's, he became well-known for being an original member of the gospel group "The Pilgrim Jubilees". Being led by the Spirit of Jesus, Melvin and "The Pilgrim Jubilees" was afforded the ability to traveled abroad for over 50 years making many sacrifices singing the Gospel of Christ. Not only was Melvin a member of the Pilgrim Jubilees, but he also was a member of other groups over the years and was currently a member of The Shady Grove Male Chorus at Shady Grove Missionary Baptist Church in Munford, Alabama. Melvin was ordained as a deacon by Rev. Clarence Henderson on March 11, 2001 and remained a servant of the Lord by continuing to work in his vineyard. Melvin was a Master Carpenter by trade and remained an active carpenter and builder for Christ until his health began to fail with his biggest building project being at the age of 67 years old. It was at this time in 2005 that Deacon Melvin Higgins would sit down with Pastor Clarence Henderson and draw out the plans for the newly built Shady Grove Missionary Baptist Church on A BROWN PAPER BAG! This was the EXACT action of DESCRIPTION of a MASTER CARPENTER! Deacon Higgins completed this project in the projected timeframe with lock and key in 2006. Melvin was a fun loving, kind-hearted, energetic person who loved gardening, fishing, singing. He was known as the Pillar of his community for gardening and the man with the GREEN THUMB. Everything he planted, it grew, and he would always give to the community and expect nothing in return. Melvin also was a true War Eagle fan and loved watching Auburn football. In the early morning hours of Saturday, May 29, 2021, after God had graciously given Melvin to us for eighty-three long earthly years, he felt it was time for him to peacefully close his eyes one last time to this earthly world, accept his new heavenly wings and fly to his new eternal home on high. Greeting him at his new home were his parents John and Rosie nell Higgins, sister, Emma Jewel Hardy, and brothers, Joe Thomas Higgins and Charles Edward Higgins. Leaving behind to cherish the many years of Melvin's loving memories are: his loving and devoted wife of 21 years, Nellie Higgins; two sons, Michael Higgins and Charles Higgins of Kansas City, Missouri' one daughter, Adrienne Kelly of Kansas City, Missouri; former spouse and mother of his children; Mary Alice Welch of Kansas City, Missouri; three stepdaughters, Freida (Rodney) Groce, Lucretia McKinney, and Jakima McKinney; four sisters, Dorothy McClendon, Nellie Jean (Clyde) Dixon of Atlanta, Georgia, Patricia Higgins, and Brenda Higgins; two brothers, Johnnie Higgins and Sanford Higgins; nine grandchildren, two great-grandchildren and a host of nieces, nephews, other relatives and friends. Although a pillar of the community has gone before us, Deacon Melvin Higgins has left a legacy behind and he will truly be missed by all the lives he has touched.

Deacon Melvin Higgins was one of ten children born to the union of the late John Higgins and Rosie Nell White Higgins in Talladega, Alabama on December 11, 1937. Deacon Higgins 83-year life's journey has truly been a blessing to everyone... View Obituary & Service Information

The family of Mr. Melvin Higgins created this Life Tributes page to make it easy to share your memories.

Deacon Melvin Higgins was one of ten children born to the union...

Send flowers to the Higgins family.