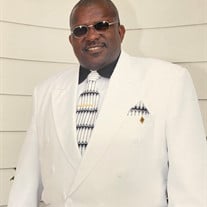 Mr. Marshall Smoot, Sr. began life's journey in Talladega County, AL to the parentage of the late Earline Smoot and Junior McKenzie in Talladega, Alabama. Mr. Smoot received Christ at a young age and united with Rocky Mount Baptist Church where he served faithfully until his passing. He was definitely a servant of the Lord's and a dedicated worker in the Lord's vineyard. He served as president of the usher board, work as a trustee and was also a member of the men's male chorus. Mr. Smoot was educated in the Talladega City School System and was a graduate of Westside high School. After high school, Mr. Smoot enlisted in the United States Army serving in the Vietnam War and receiving numerous medals and badges before he was honorably discharged. Affectionately known as "Check It Out", Mr. Smoot enjoyed entertaining everyone. He could never answer anyone without first telling them to let him CHECK IT OUT, which is where he received the nickname, Check It Out". Mr. Smoot loved his family with all his heart. Delivering plates for the Samaritan House, going to church, and cooking were all a part of his passion, but he also thought he could cut the rug with his dancing techniques while entertaining. In his spare time, you could catch him on the banks fishing of during football season you could find him sitting in front of the TV cheering on his Auburn Tigers. On December 16, 2021, Marshall answered God's call peacefully while under the care of Grandview Medical Center in Birmingham, Alabama. As he transitioned to his eternal rest, he was met by his parents Junior McKenzie and Earline Smoot, brother, Warren Smoot, sisters, Gail Hutchinson and Rosetta Hutchinson and grandchild, Jeremiah Rock. Mr. Smoot leaves memories that will forever be cherished in the hearts of his loved ones: his two sons, Marshall (Starr) Smoot, Jr and Greg Smith; three daughters, LaShalletta (Alonzo) Embry, Verneda (James) Sneed and Melissa Turner; three brothers, Bruce Hutchinson, Rufus Hutchinson and Eddie Hutchinson; two sisters, Georgia Hutchinson and Patricia Hutchinson; and a host of nieces, nephews, cousins, other relatives and friends.

The family of Marshall Smoot created this Life Tributes page to make it easy to share your memories.

Send flowers to the Smoot family.