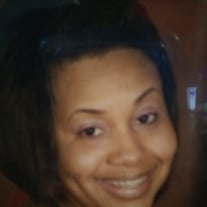 Lenetta R. McElderry began this walk of life on February 6, 1972 in Talladega, Alabama to the parentage of Wallace Rowland and Shirley Wills Rowland. Lenetta accepted Christ at an early age, but later in life while on her journey, she met her soulmate, Gregory McElderry. Together they became one and she begin fellowshipping with her newly found church home, Shady Grove Baptist Church in Munford, Alabama. Lenetta's childhood education was received in the Talladega City School system where she was a member of the Talladega High School graduating class of 1992. Lenetta was a very dedicated worker with Honda of America for 16 years. Lenetta's love for people never allowed her to meet a stranger. If you knew Lenetta, you know she always carried a very vibrant smile filled with love, energy, and enthusiasm. Not only did she love entertaining her family, but she also had a passion for traveling and going to the casinos. Lenetta will truly be missed by all the hearts she touched and joy she brought to everyone she encountered. On the evening of April 4, 2021, surrounded by loved ones while under the care of Stringfellow Memorial Hospital in Anniston, Alabama, Lenetta's life's journey ended peacefully when she accepted her Master's Call and transitioned to her eternal resting home; and upon entering those pearly gates, Lenetta was welcomed home with outstretched arms by her father, Wallace Rowland, Jr. and grandfathers, Arthur Wills and Wallace Rowland, Sr. Lenetta, a much-loved wife, mother, grandmother, and daughter, leaves to cherish in her memory a loving and devoted husband, Gregory McElderry; two sons, Darius McElderry and Corey Rowland; mother, Shirley Rowland; one brother, Todd Rowland; grandmothers, Ruth Wills Jackson and Nancy Rowland; six aunts, Sandra W. Bailey, Annette W. Russell, Sara W. Carter, Gloria Jean Curry, Patricia Cochran, and Diane Rowland; seven uncles, Arthur Wills, Jr., Houston (Carolyn) Jackson, Bobby Wills, Larry (Lorane) Wills, Jerome Rowland, Michael Rowland, and Willie Ed Rowland; four grandchildren, Lamar Rowland, Da'Myia Barclay, Chase Rowland, and Cori Rowland; and a host of nieces, nephews, cousins, other relatives and friends.

Lenetta R. McElderry began this walk of life on February 6, 1972 in Talladega, Alabama to the parentage of Wallace Rowland and Shirley Wills Rowland. Lenetta accepted Christ at an early age, but later in life while on her journey, she met... View Obituary & Service Information

The family of Lenetta McElderry created this Life Tributes page to make it easy to share your memories.

Send flowers to the McElderry family.