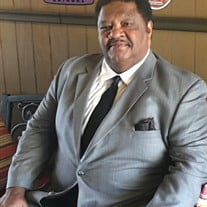 Lawrence Ricardo Ware was the tenth child born to John Edward and Vonnie Marie Ware on April 17, 1953, in Anniston, Alabama. Lawrence accepted Christ as his Lord and Savior at an early age and attended Grace Lutheran Church. There, he served... View Obituary & Service Information

The family of Dr. Lawrence Ware created this Life Tributes page to make it easy to share your memories.

Send flowers to the Ware family.