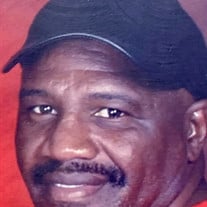 Mr. Larry Jenkins began life's journey in Talladega, AL on April 11, 1951, when he was born to the union of the late James and Lorine Hugley Jenkins. Larry found assurance in the word of God at an early age and attended several different churches in the Munford area but made Kelly Spring Missionary Baptist Church his home. Larry was educated in the Talladega County School System and was a graduate of Munford High School where he was a member of the Munford High School Lions Football Team. After high school, Larry began his working career with Wehadkee Yarn Mills for several years but was later hired by the Talladega County School System. While employed with the school system he took on another job with U. S. Pipe. He was a devoted and dedicated employee working both jobs for over 25 years, and at this point he felt it was time to enjoy family and life, so retirement was the key; however, that would not last for long because being the workaholic Larry was, he could not just sit home and do nothing, therefore he later became employed with Honda Manufacturing. After 16 years he retired once again and continued to enjoy family and life. Larry was a jack of all trades and could do any type of work, but he had a passion for carpentry. He was a great support and help for the community from the younger generation to the elderly. Larry was loved by all and to know him was to love him. On December 22, 2021, Larry answered God's call peacefully and gained his heavenly wings while in the care of Brookwood Baptist Medical Center in Birmingham, Alabama. Upon entering those pearly gates, Larry was greeted by his parents, James and Lorine Jenkins, brothers, Author Lee Jenkins and Bobby Jenkins, Sr. and sisters, Virginia Ann Jenkins, Evelyn Jenkins and Inez (Nemiah) Smith. Leaving behind to forever cherish Larry's beautiful memories are: his loving and devoted wife, Carolyn Jenkins; five sons, Cedric Jenkins of Munford, AL, Donquell Wilson of Mableton, Georgia, Xavier Jenkins of Anniston, AL, Cortez Jenkins and Christian Jenkins of Munford, AL; one daughter, Keatrice Wilson of Munford, AL; one brother Jeremiah Jenkins of Augusta, GA; one granddaughter, LaTerria Deanna Jenkins of Anniston, AL; father and mother-in-law, James (Juanita) Wilson of Talladega, AL; three sister-in-laws, Barbara Jenkins, Jacquelyn (Steve) Swain and Rodney (Everet) Simmons all of Talladega, AL; seven nieces, Marilyn Tuck and Carolyn (Charles) Ellis of Munford, AL, Barbara (Taron) Burjess and Yolanda (Donnie) Hale of Columbus, OH, Samantha (Shawn) Chilton and LaKeitra Jenkins of Augusta, GA, LaJackie Wilson, Breatice Wilson of Talladega and Kimberly Jenkins of Tampa, FL; four nephews, Patrick Jenkins of Norfolk, VA, Author (Joan) Jenkins, Jr. of Birmingham, AL, Mustafaa B. Yisrael of Cincinnati, OH and Bobby Jenkins, Jr. of Munford, AL; special friends, Brenda Hill, Scott Mayo (DJ), Ray Davis, Charlie Mumpfield and Curtis Gooden; and a host of other relatives and friends.

Mr. Larry Jenkins began life's journey in Talladega, AL on April 11, 1951, when he was born to the union of the late James and Lorine Hugley Jenkins. Larry found assurance in the word of God at an early age and attended several different... View Obituary & Service Information

The family of Mr. Larry Jenkins created this Life Tributes page to make it easy to share your memories.

Send flowers to the Jenkins family.