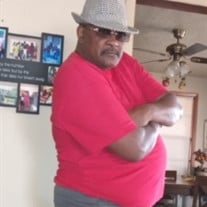 Mr. Lajuan "Rat" Carter was born to the parentage of the late Mr. Ollie Carter, Sr. and the late Mrs. Bessie Mae Carter, in Talladega, AL on August 12, 1969. Lajuan received his education in the Talladega City School System and was a graduate of Talladega High School. Upon his completion of school, Lajuan worked for Metro D Construction and Talladega Housing Authority. Along Lajuan's life journey, he became the father of two daughters, Quenshekya and Jasmine. Later on his journey he met and married his soulmate, Mrs. Kathleen Barclay Carter whom he always loved, provided, and cared for. Lajuan, better known as "Rat," was a skilled and dedicated hard worker. He worked at Metro D for many years and prior to the job ending his supervisor advised him to put in an application at the Talladega Housing Authority. He got that job and loved everything about it. Daily he would talk about his co-workers, the jokes and pranks he would play on them and how he mocked other people jokingly. Lajuan would be on call on the weekends to fix busted pipes or doors that were damaged, and he did not mind doing it simply because that is what he lived for. A lot of days he would be sick but would not stay home because he felt some of his duties could only be done by him; however, it was also because of all the people he encountered. Lajuan was known by everybody no matter where he went, people knew him. His family and friends were the love of his life. If he did not call every day, he called every other day. Sometimes he could make you so mad, but because of the kind of person Lajuan was you couldn't stay mad long. Lajuan was an avid football fan of the Alabama Crimson Tide. HE LOVED THE ROLL TIDE!!!! On Sunday, March 7, 2021 all of that abruptly came to an end when Lajuan "Rat Carter answered the call of his Master, gained his heavenly wings and transitioned to his eternal home joining his parents, Mr. Ollie Carter, Sr. and Mrs. Bessie Mae Carter and brother, Jimmy Elston. Lajuan's memories will forever be cherished and remembered by his loving and devoted wife, Mrs. Kathleen Barclay Carter; two daughters, Quenshekya Young and Jasmine Hutchinson; two brothers, Ollie Carter, Jr. and Leotis Carter; three sisters, Dorothy Suttle, Mary Curry, and Melody Taylor; and a host of nieces, nephews, cousins, and dear friends.

Mr. Lajuan "Rat" Carter was born to the parentage of the late Mr. Ollie Carter, Sr. and the late Mrs. Bessie Mae Carter, in Talladega, AL on August 12, 1969. Lajuan received his education in the Talladega City School System and was a graduate... View Obituary & Service Information

The family of Mr. Lajuan Carter created this Life Tributes page to make it easy to share your memories.

Mr. Lajuan &quot;Rat&quot; Carter was born to the parentage of the late...

Send flowers to the Carter family.