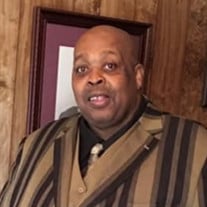 Mr. Kenneth Davis Garrett, 57, was born on March 27, 1965, to Jim Davis and Maggie Garrett in Talladega, Alabama. At an early age, Kenneth confessed Christ and joined the Kingston Missionary Baptist Church. He received his formal education in the Talladega County School System and was a graduate of Winterboro High School. Kenneth soon joined the workforce and became a dedicated employee with the Alabama State Department of Transportation for 20 years working in various positions, from being a driver to a maintenance man, before he retired. He was a very outgoing and fun-loving person with a kind heart. Kenneth was a member of the High Rollers Social and Savings Club and he was also a brother of College City Elks Lodge #1171 where he previously served as exalted ruler. Kenneth Davis Garrett, affectionately known throughout his community and to many as "Big Stank" was an avid football fan who was a firm believer in the Auburn War Eagles. He found great joy and excitement in Drag Strip Racing and loved the game of softball. He loved coaching the Winterboro Girls Community Softball team and made sure the girls knew the game of softball well enough to win the game. Kenneth was not only good at coaching the girls' team, but he also coached the A-Team boys community softball team. "Big Stank" will always be loved and missed immensely by his community, family, friends and all the hearts he has touched throughout his 57-year earthly journey. On the evening of Wednesday, April 20, 2022, while under the care of NHC Rehabilitation Center in Anniston, Alabama, Kenneth peacefully transitioned from this walk of life to his eternal home joining his father, Jim Davis Garrett, his brother Jimmy Seals, his grandparents, aunts and uncles. Cherishing his memories are his loving wife of over 20 years, Mrs. Elizabeth Holtzclaw Garrett of Talladega, Alabama; one daughter, Ms. Mon'Daijaia Sha'curii Garrett of LaGrange, Georgia; his mother, Mrs. Maggie M. Garrett of Alpine, Alabama; one brother, Bruce (Shovette) Seals of Talladega, Alabama; one sister, Phyllis Lawson of Okemos, Michigan; his God sister, Ms. Sasha Garrett of Lincoln, Alabama; his special friends, Harry (Jo-Jo) Powell, Cleveland Martin and Will Higgins; and a host of aunts, uncles, nieces, nephews, cousins, other relatives and friends.

The family of Kenneth Garrett created this Life Tributes page to make it easy to share your memories.