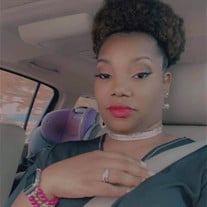 On April 6, 1985, Mr. and Mrs. Carleton and Pattye Lipscomb was blessed to welcome their one and only beautiful bubbly baby girl Karlatyn Shari to the world. At an early age, Karlatyn received the gift of the Holy Ghost at Holy Hill Church of Our Lord Jesus Christ in Lincoln, Alabama under the leadership of Bishop Edward L. and Mother Mattie Thomas where she served faithfully singing in the choir and playing the drums. Later in life, Karlatyn continued serving the Lord as a member of Holy Temple Ministries under the tutelage of her father, Elder Carleton Lipscomb. Karlatyn received her childhood and adolescent education in the Talladega County School System and was a 2003 graduate of Lincoln High School. She decided to further her education by enrolling at Gadsden State Community College and earning a degree in Cosmetology, which gave her the opportunity of becoming a licensed Cosmetologist. Karlatyn was a determined young woman striving to become an entrepreneur and was currently enrolled at Gadsden State Community College in hopes of owning her own business someday. Along the path of Karlatyn's life journey, she met and fell in love with her soulmate, Kenyatta O'Neal and together they became one as they were united in Holy Matrimony on June 4, 2011. With the blessing of a wonderful husband and two beautiful daughters, together they made the glorious decision to expand their family with three additional beautiful daughters. Although Karlatyn treated everyone like family, her five daughters were her most prized possessions. She was a proud mother and wife who enjoyed making sure her daughters had all the resources they needed by giving them all the support a mother could give. She always loved, provided, and cared for her family without hesitance. As a loving wife, she made sure her husband and household were taken care of as well, especially when it came to domestic engineering. With five girls and being a wife, she made the job seem so easy. Although Karlatyn was a busy mother and wife, she always found time for herself to go shopping, which was her favorite hobby. She loved helping others and anyone she knew that needed assistance. Going to church and being the loving wife and mother she was, is what Karlatyn enjoyed doing. She was a fun-loving and kind-hearted wife, mother, daughter, sister, aunt, cousin, niece, and friend that was cherished immensely by her family and all who knew her, but the jewels of her life were her beautiful girls. Karlatyn gained her heavenly wings and boarded the train to glory after accepting her Master's call on Tuesday, October 5, 2021 at the age of 36, while under the care of Regional Medical Center in Anniston, Alabama Karlatyn leaves to cherished and preserve her wonderful memories a loving and devoted husband Mr. Kenyatta O'Neal; five daughters, Kenley Sharia, Karley Sharae, Kiley Sharice, Amya Diamond and Ja'Kayla Beja; four brothers, Cameron Smith, Dameion Smith, Philip Beavers and Clifton Beavers; grandmother, Mrs. Dorothy D. Lipscomb; in-laws, Mr. and Mrs. Kenneth and Annie O'Neal; four aunts, Marva Cotton of Lincoln, AL, Patti Sanders and Rhonda Pickett of Pell City, AL and Daphne Carpio of Palestine, TX; five uncles, Chris (Rhonda) Smith of Leeds, AL, Effrem Lipscomb of Atlanta, GA, Raphael Lipscomb of Pell City, AL, William (Patricia) Lipscomb of Trussville, AL and Michael (Kristal) Lipscomb of Palestine, TX; three brother -in-laws, Recco Ware, Mecca O'Neal, and Le'Andre' O'Neal; and a host of nieces, nephews, other relatives and friends. Karlatyn will truly be missed by all the lives she has touched and people she has encountered. The unexpected departure of Karlatyn has left many broken hearts that only God can heal.

On April 6, 1985, Mr. and Mrs. Carleton and Pattye Lipscomb was blessed to welcome their one and only beautiful bubbly baby girl Karlatyn Shari to the world. At an early age, Karlatyn received the gift of the Holy Ghost at Holy Hill Church... View Obituary & Service Information

The family of Karlatyn O'Neal created this Life Tributes page to make it easy to share your memories.

Send flowers to the O'Neal family.