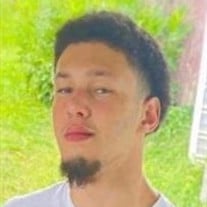 Johnny Weaver Williams, 17, was born on January 2, 2003 to the parentage of Mr. Johnny Deric Williams and Mrs. Mary Weaver Williams in Talladega, Alabama. At an early age, Johnny accepted Christ as his Lord and Savior and united with First Baptist Church where he enjoyed being a member of the bible class. During his youth, Johnny enjoyed numerous sports and activities, but amongst those he excelled in wrestling. He was educated in the Talladega City School System. Johnny was also a baseball and basketball player with the Talladega Little League. Johnny, affectionately known by his family and friends as “Little Johnny” was well known and loved. Unexpectedly in the late evening of Thursday, December 3, 2020, Johnny accepted his wings upon answering the call of his Master and transitioned to his eternal home joining his grandparents, John A. Alexander, Dee Weaver and Sarah Weaver. Leaving behind to cherish all his love and precious memories are his loving parents, Mr. Johnny Deric Williams and Mrs. Mary Weaver Williams; grandmother, Venora Williams of Plantersville, Alabama; grandfather, T.V. Weaver of Leeds, Alabama; aunts and uncles, James and Vera Casson of Tacoma, Washington, Mitchell and Nadaine Liggins of Orting, Washington, Kenneth and Monica Williams of Thomasville, Alabama, John Eric Williams and Jackie Motley of Jones, Alabama, Hazel and Larry Nalls of Plantersvile Alabama, Marty and Christy Whitener of Birmingham, Alabama, Renard Alexander of Houston, Texas, Beverly Nix of Plantersville, Alabama, Linda Bearden of Alpharetta, Georgia, and Martha Jo Anderson of Montgomery, Alabama; and a host of other relatives and friends. Johnny will truly be missed in his community by his friends, loved ones, and by all the hearts he has touched. There will be a public viewing for Johnny on Thursday, December 10, 2020 from 1-6 p.m. at S.M. Goodson Funeral Home. Funeral Services will be Private. Professional services entrusted to S.M. Goodson Funeral Home-Talladega. In lieu of flowers, the family request donations be sent to Mary Weaver Williams at AlaTrust Credit Union, 303 East South Street, Talladega, Alabama 35160.

Johnny Weaver Williams, 17, was born on January 2, 2003 to the parentage of Mr. Johnny Deric Williams and Mrs. Mary Weaver Williams in Talladega, Alabama. At an early age, Johnny accepted Christ as his Lord and Savior and united with First... View Obituary & Service Information

The family of Mr. Johnny Williams created this Life Tributes page to make it easy to share your memories.

Send flowers to the Williams family.