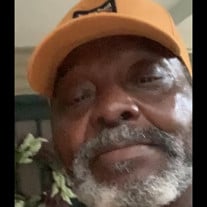 Mr. John S. Jones was born to the union of L.C. Jones and Lela Mae Garrett Jones on April 12, 1947, in Alpine, Alabama. At an early age, John accepted Christ and united with St. Campbell Baptist Church where he was a faithful member until his passing. John received his formal education in the Talladega County School System at Hannah J. Mallory Elementary School and was a graduate of Talladega County Training School, known today as Talladega County Central High School. After completing school, John began working in the construction industry as a laborer, but after learning the skills and retrieving the knowledge of a skilled carpenter, John became the Jack of All Trades and Mr. Fix It. He was a member of the Birmingham Union Local 559 for many years. Along John's journey in life, he met his soulmate, the former Miss Nettie Keith, and together they became one when they were united in Holy Matrimony. John loved his wife with all his heart, body, and soul. There was nothing he would not do for his Nettie. Although loving and caring for his wife was his passion, John enjoyed working in his garden, fishing, talking and watching him some Alabama Crimson Tide Football; but we can't leave out the GRIT TV station for all his Western shows. He loved watching Westerns... On Monday night, August 9, 2021, Mr. John S. Jones peacefully answered his Master's call and transitioned to his eternal resting place while under the care of St. Vincent's St. Clair in Pell City, Alabama. Upon entering those pearly gates, he was greeted by his parents, L.C. and Lela Mae Jones, son, John S. Jones, Jr., brothers, John Henry Jones and Joel Jones, sand sisters, Datie Mae Jones Garrett and Delois Jones Cooper. John's memories will forever be cherished by his loving wife of 37 years, Mrs. Nettie Keith Jones; two sons, Terry Jones and Lemetric Jones; five brothers, L.C. (Datie) Gilbert, Jr., Robert Lee Jones, Edward Charles Jones, T. Lovely (Sonya) Jones, Sr., and Joe Nathan (Tamesia) Jones; two sisters, Lutitia Jones Keith and Cynthia Jones; two sisters-in-law, Mannie Jones and Tina Jones; and a host of grandchildren, aunts, uncle, nieces, nephews, other relatives, and friends.

Mr. John S. Jones was born to the union of L.C. Jones and Lela Mae Garrett Jones on April 12, 1947, in Alpine, Alabama. At an early age, John accepted Christ and united with St. Campbell Baptist Church where he was a faithful member until... View Obituary & Service Information

The family of Mr. John Samuel Jones created this Life Tributes page to make it easy to share your memories.

Send flowers to the Jones family.