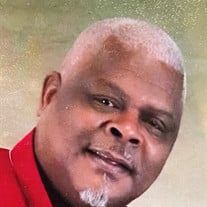 John’s earthly journey began on May 15, 1968 the parentage of the late Mr. John D. Duncan and Mrs. Margaret Garrett Duncan in Talladega, Alabama. At an early age, John, a beloved husband, father, son, and brother accepted Christ as his Lord and Savior and united with Kingston Missionary Baptist Church, but later in life, he begins to attend Peace Missionary Baptist Church. As a child, John was educated in the Talladega County School system and would later become a 1986 graduate of Talladega County Training School, known today as Talladega County Central High School. John was an avid sportsman who loved his school and was a dedicated alumnus of his Alma Mater. He was not only very supportive of all the TCTS/TCCHS athletic programs assisting with contributions and fundraisers, but to many charities as well. If you knew John, you know he was a very good, kindhearted, and loving person who was a big Alabama “ROLL TIDE” Football Fan with a love for Jack Daniels Whiskey and Cigars.  Along John’s life’s journey, he met and fell in love with his soulmate of 29 years, the former Miss Stephanie Swain. John and Stephanie would later prove to be inseparable by becoming united in holy matrimony on October 11, 2008, and to this union was born a beautiful baby girl, Mrs. Kayla Duncan Scott.  John was very affectionate and compassionate when it came to his family. He loved spending time cooking and entertaining his family and friends. John was a Welding Supervisor and dedicated employee with Anniston Army Depot for over 20 years at the time of his death. He was a former member of Magnificent 15 plus 3 Social Savings Club and currently a member of AFGE (American Federation of Government Employees). John’s love for people never allowed him to meet a stranger. He loved everybody and everybody loved John. He always kept you laughing and was full of energy and enthusiasm. Not only did he love entertaining family and friends, he loved his wife and daughter, but was patiently awaiting the arrival of his first grandchild in June 2021. This new addition would be added to his most prized possessions, Stephanie and Kayla. John will truly be missed by all the hearts he touched and joyful spirit he brought to everyone he encountered.  John accepted his heavenly wings as he peacefully answered the call of his Master on the morning of Thursday, February 4, 2021, while under the care of Brookwood Citizen’s Baptist Medical Center. Welcoming John home with outstretched arms at those pearly gates of heaven was his father, Mr. John D. Duncan. Although the unexpected departure of John has left many broken hearts that only God can heal, his love and fun memories will always be remembered and cherished by his loving and devoted wife of 12 years, Mrs. Stephanie Swain Duncan; his beautiful daughter, Mrs. Kayla (Stedman) Scott; mother, Mrs. Margaret Duncan; two brothers, Mr. Ricky (Millicent) Duncan and Gregory Duncan; three brother-in-laws, Archie (Latasha) Swain of Macon, GA, Eric (Renea) Swain of Kennesaw, GA, and Kenneth (Lisa) Swain of Talladega, AL; three sister-in-laws, Renette Beavers of Marrietta, GA, Lakeysha  (Tracy) Smith of Prattville, AL and Kimmala Swain of Talladega, AL; and a host of aunts, uncles, cousins, other relatives, and friends.

The family of Mr. John Stanley Duncan created this Life Tributes page to make it easy to share your memories.

Send flowers to the Duncan family.