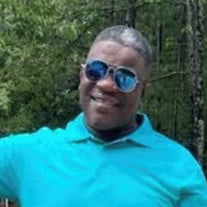 Mr. Jesse Frank Strown began life's journey in Talladega, AL on July 24, 1965, when he was born to the union of the late Bobby Frank and Dorothy Caldwell Strown. Jesse found assurance in the word of God at an early age and attended several different churches in the but made Antioch Missionary Baptist Church his home. Jesse was educated in the Talladega County School System and was a graduate of Lincoln High School Class of 1983. After high school, Jesse began his working career as a cement finisher in the construction industry alongside his father and his brothers. Jesse, affectionately known by his family and friends as "Frankie" and "Jesse Duke" was well-known in the community. He was often called "The Peacemaker" because he loved keeping and making peace amongst everyone. Jesse enjoyed riding his motorcycle, dancing, spending time with his family and friends and riding down the road to play the slots. As a kid and even in adulthood, Jesse loved dancing to "YMCA". He was definitely the life of the party and kept you laughing. During football season, Jesse could be found watching and cheering on his Alabama "Roll Tide" Football Team. Although Jesse loved keeping the peace, he could throw you a spring of wisdom whether you wanted to catch it or not. On Tuesday morning, February 8, 2022, Jesse answered God's call peacefully and gained his heavenly wings while in the comfort of his home surrounded by loved ones. Upon entering those pearly gates, Jesse was reunited with the love of his life, his wife, Barbara Jean McAfee and his parents, Bobby and Dorothy Strown. Leaving behind to forever cherish Jesse's beautiful memories are his four daughters, Tiarra Sherie Dye, Ericka McAfee, Tiffany Wynn and Jessica McAfee; five brothers, Charles B. Strown, Bobby Earl (Rita) Strown, Richard Allen (Renee) Strown, Eric Jackson and Aundre Jackson; three sisters, Darlene (Curt) Gooden-Welch, Peggy Strown and Bertha Embry; six grandchildren, and a host of aunts, uncles, other relatives and friends.

Mr. Jesse Frank Strown began life's journey in Talladega, AL on July 24, 1965, when he was born to the union of the late Bobby Frank and Dorothy Caldwell Strown. Jesse found assurance in the word of God at an early age and attended several... View Obituary & Service Information

The family of Jesse Frank Strown created this Life Tributes page to make it easy to share your memories.

Send flowers to the Strown family.