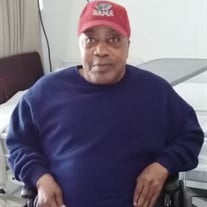 Mr. Jerry "Miles" McKenzie began life's journey in Talladega County, Alabama on March 28, 1948 to the parentage of the late James Lane and Eula Mae McKenzie. Mr. McKenzie received Christ at a young age and united with Lily Hill Baptist Church. He was educated in the Talladega City School System and was a member of Westside High School graduating Class of 1967. While in high school, Mr. McKenzie was an avid sports player and was the football star for the school football team. After completing high school, Mr. McKenzie joined the workforce beginning his career in textiles working at Wehadkee Yarn Mills for several years before becoming employed with Image Yarns until retirement. Being one of ten siblings, Mr. McKenzie affectionately became known as "Miles" not only to his family but to everyone who knew him. He enjoyed entertaining everyone, whether it was playing a good game of cards, enjoying his family or being the avid sports fan, he was and watching a good game of football. Through the years, his love of football teams would sporadically change, but San Diego and Pittsburgh were his favorites; however, basketball was a different story with the L.A. Lakers and Chicago Bulls being his teams of choice. On Saturday evening, Mr. Jerry "Miles" McKenzie answered God's call peacefully while under the care of Talladega Health and Rehab in Talladega, Alabama while surrounded by loved ones. As he transitioned to his eternal rest, he was welcomed home by his parents, Mr. James Lane and Ms. Eula Mae McKenzie and his two brothers, Sam "Mighty Tight" McKenzie and Chris McKenzie. Mr. McKenzie leaves memories that will forever be cherished in the hearts of his loved ones including his two brothers, Aldren "Gay" McKenzie and Charles McKenzie; seven sisters, Barbara (William) Scott, Gwendolyn "Bootsie" (Larry Jennings) McKenzie, Deborah "Tutta" McKenzie, Sedra "Vet" McKenzie, LaDean "Dean" (Earl Kelley) Zinnerman, Janet "Nece" Lane Ware and Kim Lane; one sister-in-law, Millicent "Ball" McKenzie; and a host of nieces, nephews, cousins, other relatives and friends.

The family of Jerry McKenzie created this Life Tributes page to make it easy to share your memories.

Send flowers to the McKenzie family.