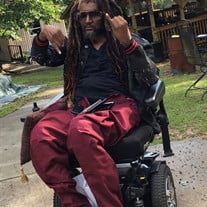 Jeffrey L. "1000" Glover, son of Millie Delores Glover and the late Jeff Glover was born on August 16, 1969 in Lincoln, Alabama. At the age of one, Jeffrey moved to Boston, Massachusetts. Later in his youth at the age of nine, he moved to Atlanta, Georgia where he was raised in zone three. Jeffrey affectionately known to many as "1000" was a well-known and respected man who was acknowledged for helping others anyway he could. He loved his kids, siblings, and grandkids. Jeffrey was definitely a family man and if you knew him, you know that he had a passion and love for GIRLS GIRLS GIRLS!!! Jeffrey was a big enthusiast of cars, big rims, and loud music. He loved to write rhymes and make his own music. Jeffrey's mom was known for cooking because he loved to eat. "1000" had the heart of a lion, very brave and bold. On his last birthday, he went sky diving, where he jumped 20,000 feet out of an airplane while paralyzed. He was completely fearless. This one-of-a-kind man is definitely a legendary icon. You will never encounter another human like him. A real-life superstar he was. "1000" is known by many and loved by several. He will truly be missed by all the hearts he has touched. While under the care of University of Alabama in Birmingham, AL on Monday, March 1, 2021, Jeffrey's fifty-one-year earthly life journey ended as he accepted his wings and transitioned to his new home. Jeffrey's memories will forever be cherished in the hearts of his mother, Millie Glover; two children Kevia Love Garris and Donte Garris of New Jersey; one sister, Tonya Glover; one brother, Dexter Glover of Atlanta, Georgia; eight grandchildren, Makiyan Garris, Aniya Dickens, Tylan Garris-Howard, Milan Dickens, Kyon Garris, Zyonnah Garris; seven aunts, Carrie Wills of Lincoln, Alabama, Barbara Fleming of Chicago, IL, Clara Embry of Talladega, Alabama, Bernell Fomby of Anniston, AL, Donnie Davis, Connie Knox of Maryland and Bonnie Goggins of Anniston, AL; one uncle, Albert Nixon of Talladega, AL; one nephew, Marcus Bettes of Georgia; two close little cousins who looked at him as an uncle, Durrell and Nick Embry. Jeffrey also had a host of very special cousins and friends. We Love You "1000"

Jeffrey L. "1000" Glover, son of Millie Delores Glover and the late Jeff Glover was born on August 16, 1969 in Lincoln, Alabama. At the age of one, Jeffrey moved to Boston, Massachusetts. Later in his youth at the age of nine, he moved to... View Obituary & Service Information

The family of Mr. Jeffrey L Glover created this Life Tributes page to make it easy to share your memories.

Send flowers to the Glover family.