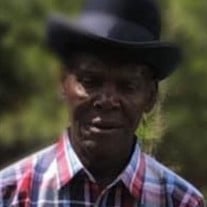 Mr. J.D. Garrett, 71, of Alpine, Alabama was born May 1, 1950, to the parentage of the late Rev. Henderson Garrett and Ruby Millender Garrett J. D. confessed Christ as his Savior at an early age and united with Kingston Missionary Baptist Church. As a youth, J. D. received his formal education from Nottingham School. After school, J.D. was employed with Crown Textile for several years. He later begins his working career in the car business as an auto mechanic and detailing cars. Born Jefferson Davis Garrett, and always affectionately known as J.D., he spent many years in the car business, and this became his true passion when he met Clarence "Sonny" Cook, Jr. who soon became his best friend. The two worked together at Sonny Cook Motors for many years. Not only did J.D. love cars, but he also loved MONEY and DANCING!! Until his demise, J.D. kept a record of his money. He loved watching football and awaited the season to start. Along J.D.'s path in life, he became the father of eleven loving children, all of whom he loved dearly. J.D. met and married the love of his life, the late Mrs. Elouise Calhoun Garrett, of whom he had spent 41 blessed years with. On the evening of, Monday, August 23, 2021, after answering his Master's call while in the care of Coosa Valley Medical Center, J.D. Garrett, put on his dancing shoes one last time to prepare to dance the streets that are paved with gold joining his wife, Mrs. Elouise Calhoun Garrett, parents, Rev. Henderson and Ruby Garrett, sisters, Rose Hartley, Janie Mae Swain, Elizabeth "Nett" Swain and Annie "Stank" Swain, and brother, James Garrett. His memories will be cherished by his loving and devoted children, Anthony Andre Fomby, Tracy Fomby, Tricia (Richard) Garrett, Sheronica (Johnny) Swain, Felicia Calhoun, Ella Mack, Acourtney (Lenore) Lawon, Jeffrey Calhoun, LaTasha Calhoun, Vinnie Calhoun, and Shakita (DeWilliam) Woodgett; one sister, Florence Garrett; thirty-four grandchildren; nine great-grandchildren; and a host of other relatives and friends.

Mr. J.D. Garrett, 71, of Alpine, Alabama was born May 1, 1950, to the parentage of the late Rev. Henderson Garrett and Ruby Millender Garrett J. D. confessed Christ as his Savior at an early age and united with Kingston Missionary Baptist... View Obituary & Service Information

The family of Mr J.D. Garrett created this Life Tributes page to make it easy to share your memories.