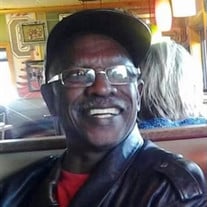 Deacon James Arthur Worrills, Sr. was born on February 1, 1942, to the late Mr. James Worrills and Mae Lou Moses Worrills in Lumpkin County, Georgia. At an early age, James accepted Christ, loved and served the Lord. In 2013, James was ordained as a Deacon at New Life Gospel Church where he served faithfully for 21 years and if being on time for services meant leaving his wife behind to come later, that is what Deacon James did and Mrs. Annie understood. He attended school in the Lumpkin County School System and was a graduate of Stewart County High School. After graduation, James migrated north to Cleveland, Ohio for better job opportunities, which is exactly what he found when he became employed with Valley Mold and Iron as a crane operator. Soon after getting settled in, James would accept a blind date offer, meeting on the corner at a bus stop; little did he know this would lead to a commitment of 53 years with his soulmate, Mrs. Annie Jones Worrills and four beautiful children. After 25 years of being a devoted employee, on January 7, 1985, James decided it was time to retire and he and Annie move their family to Alabama for a change in environment and a better living. James could not be still, so he began working several jobs including landscaping, and eventually retired a second time from Superior Waste Management due to health issues. James affectionately known to everyone as "Zero" was a humble and loving person who was always full of joy and love. He enjoyed going to the center hanging out with the seniors, playing spades, bid wiz, dominos, poker, and teaching his granddaughter "Tink" how to cheat when playing cards. Eating sweets and loving on his wife and family was a must for Mr. James. He is truly going to be missed. On Tuesday, September 8, 2021, while in the care of Brookwood Citizen's Baptist Medical Center, God called James home and he transitioned peacefully from this earthly walk of life to his new eternal home. After receiving the Master's call, James was welcomed home by his parents, James and Mae Lou Worrills, sister, Cindy Taylor, brothers, Sherman Taylor, Jr., Solomon Worrills and George Taylor. James loving memories will forever be cherished in the hearts of his loving and devoted wife of 53 years, Mrs. Annie Worrills; two daughters, TuWanda Worrills and Andrea (Ron) Dothard; two sons, Richard Porter and James (Wanda) Worrills, Jr.; nine grandchildren, Cameron, Octavia, Jerrica, Shtoria, Ariel, Titiana, Lil Ron, Ja'Mayia, and Malcolm; seven great-grandchildren, Arianna (Tink), Jacolby, Trinity, and James Jr. four grandchildren in Ohio; sister, Willie Pearl Worrills of Eastern, Pennsylvania; four sister-in-laws, Willie Nell Wilson, Sharon Dykes, Sundra Williams, and Shirley Jones; brother-in-law, Michael Williams; special friend, John McClellan (Mac); and a host of nieces, nephews, cousins, other relatives and friends.

The family of James A Worrills created this Life Tributes page to make it easy to share your memories.

Send flowers to the Worrills family.