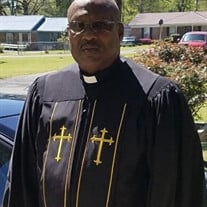 Pastor James E. Jackson was born on August 20th, 1949 in Talladega, Alabama, to the late Leonard and Ethel Jackson. He was one of 13 children. He was educated in the Talladega County School System and graduated from Ophelia S. Hill High School class of 1968. Pastor Jackson was employed at Crown Textile, Quality Manufacturing and retired from General Dynamics. James was a passionate fisherman and loved to fish. His favorite fish to catch was Brim, Cat and Crappie. James was also a master griller. If you wanted good bar-b-que, James was the best. He was an avid Auburn football fan. Anything Auburn and you became his favorite person. He loved working with the ground, and always kept a beautiful garden. James often shared his harvest with many in the community. Pastor Jackson was preceded in death by his first wife and mother of his three children, Ada T. Jackson: his second wife, Alberta Besteder Jackson, eight sisters and two brothers. He transitioned from this life on Friday, April 8th at 11:13 p.m. at the University of Alabama, Birmingham. Pastor Jackson was baptized in Jesus Name and received the gift of the Holy Ghost April 1976 at Refuge Church of Our Lord Jesus Christ in Talladega. He served as the church Treasurer on the local level and at the State level. Later, he became the Senior Pastor. Pastor Jackson was a true example of Titus 1:8 as he was a great leader and a man of integrity that refused to compromise on matters of principle. He was honest and trustworthy. He dedicated his life to sharing the good news of Jesus Christ to all. His favorite scripture was Acts 2:38. He saw to the needs of the church both spiritually and physically. He was concerned about the lives of his members and the people that God had entrusted under his care. He was a good listener and a great confidant. Pastors are gifts of God to the church according to Ephesians 4:11. Pastor Jackson was a true gift to the people of Refuge. He was always humble and respectful to all he encountered. Precious memories will forever be cherished by devoted children: Cynthia (Terrance) Perry (Virginia), James Jackson (Anniston), Katrice Jackson (Birmingham), Jamal Jackson (Birmingham), James McKenzie (Talladega); grandchildren: Amya and Alexis Perry (Virginia), Jacory and Jacob Jackson (Anniston), Whitney Scales, Tishae Holt and Alexis McKenzie (Talladega); brothers: Samuel (Ollie) Jackson (Birmingham) and Johnny (Annette) Jackson (Talladega); sisters-in-law: Dorothy Cabbil (Bessemer), Brenda Lacey (Birmingham), Joyce Besteder, Patricia Besteder and Kathleen Little (Bessemer), Jessie (Bob) L. Scott (Newark, New Jersey); uncle: Nathaniel Rembert (Fairfield); Aunts: Callie B. Turner (Chicago), Sandra Rembert (Bessemer); a host of nieces, nephews, other relatives and friends.

Pastor James E. Jackson was born on August 20th, 1949 in Talladega, Alabama, to the late Leonard and Ethel Jackson. He was one of 13 children. He was educated in the Talladega County School System and graduated from Ophelia S. Hill High School... View Obituary & Service Information

The family of Pastor James E Jackson created this Life Tributes page to make it easy to share your memories.