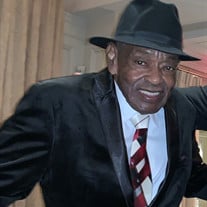 James Thomas “JT” Bradford was born on April 26, 1942 in Talladega, Alabama to the late James Eugene and Nona Hatten Bradford. Educated in the Talladega school system, he was a 1961 graduate of Westside High School where he played football. After high school, JT joined the United States Army where he advanced his education while stationed in Arizona. He later served in Southeast Asia during the Vietnam War working in central intelligence. After 6 years of service, his tour of duty ended in Maryland in 1968. Following an honorable discharge from the Army, JT moved back to his hometown of Talladega, where he returned to civilian life and began a career in insurance. Soon afterwards, he met and married Eula Hearn in 1970. The two moved to Anniston, and were blessed with three children, Sabrina, Valorie, and James II. While in Anniston, JT embarked on a new career in telecommunications with South Central Bell where he gained increasing responsibility. After years of working with South Central Bell, he founded Bradford Telecommunications where he furthered his career in the industry as a business owner. In 1987, the Bradford family relocated to the suburbs of Atlanta, GA when JT secured a position with AT&T as a site manager with the Georgia World Congress Center where he was responsible for managing event telecommunications. When the Georgia Dome was built in the early 1990’s, he managed program broadcasting for professional and collegiate sporting events, concerts, and other special events held at the facility. Due to the nature of his career, JT encountered many celebrities and attended countless football bowl games. Perhaps most memorable is the 1994 Super Bowl where he and his team ensured millions of fans could enjoy the game as it was being broadcast. JT enjoyed his career and all the opportunities it afforded him until his retirement in 2001. Over the next couple decades, JT could often be found fishing at the lake across from his home. He loved the outdoors and maintained an impeccable lawn, and always grew fresh vegetables. He and his dog, Thaddeus, Jr., took daily walks in the park. JT was widely known and greatly loved. No matter who he encountered, he always offered a smile, a funny story, and ended most conversations with “Have a good day and pass it on.” He treasured his family and friends and enjoyed entertaining. He was a grill-master, music connoisseur, and an avid card player. He really appreciated a good celebration—birthdays and holidays, with Christmas being his favorite. JT knew and loved the Lord and was a faithful member of New Hope Missionary Baptist Church in Powder Springs, GA. He departed this life on January 5, 2021, and is survived by his three children: Sabrina Bradford Warden, Valorie Bradford Hamilton, and James Thomas Bradford II, all of Atlanta, GA; three grandchildren: Aaron Hamilton, Chandler Warden, and Ayden Hamilton; two sisters: Freddie Johnson of Birmingham, AL and Dorothy (James) Merritt of Talladega, AL, and a host of cousins, nieces, and nephews. He was preceded in death by his parents: James and Nona; two sisters: Missie and Annie; and three brothers: William, Charles, and Johnny Cecil.

James Thomas &#8220;JT&#8221; Bradford was born on April 26, 1942 in Talladega, Alabama to the late James Eugene and Nona Hatten Bradford. Educated in the Talladega school system, he was a 1961 graduate of Westside High School where he played... View Obituary & Service Information

The family of Mr. James Thomas "JT" Bradford created this Life Tributes page to make it easy to share your memories.

Send flowers to the Bradford family.