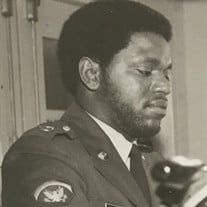 Isom Hermon Lawler was born on October 17, 1951 to the late Nellie Ruth Lawler Twymon and Isom Farris. He was proceeded in death by his parents and two older brothers, Ben Twymon, Jr. and John Wayne Lawler. Isom "Hermon" received Christ at an early age and joined Africa Baptist Church in Talladega, Alabama. After migrating to Brooklyn, New York in 1963, he later joined Our Lady of Good Counsel Catholic Church. His education began at Pine Hill Elementary School and Robert Russa Moton in Alabama. He later attended Franklin Delanor Roosevelt High School in Brooklyn, New York. When he completed his high school matriculation, he was immediately hired by United States Postal Service. After leaving the Postal service he joined the United States Army with a final rank of SPEC 5. He was a member of the military for 12 years. Upon completing his military career, he obtained his Associates Degree in Business Administration. This enabled him to begin his second career working for HIP (Hospital Indemnity Plan). Due to health issues, he took early disability retirement. Hermon was an avid sports fan. He could provide all that stats on every team and every player. He was a Jeopardy enthusiast. He made the answers seem easy. Hermon was very smart and intuitive. He could fix any and everything. One of his passions was trivia. At any given moment he would ask a random did you/do you know question and anticipate you not being able to answer so that he could glowing give the answer. His hobby was coin collecting which he truly enjoyed. Hermon leaves to cherish in his memory his children, Demetrice Drake of Jarratt, Virginia, Monica (Johnny) Johnson and Darrell Estelle, of Talladega, Alabama and Arielle Ransome of Brooklyn, New York; four grandchildren, Tyshon Prezzy, Kyia Jones, Deasia Hill, and Jacob Johnson; four sisters, Martha S. Lawler of Brooklyn, New York, Nellie Faye Shannon of Far Rockaway, New York, Charlene Gilliam of Douglasville, Georgia, and Isheka Farris of Orangeburg, SC Cleveland, OH; two aunts, Catherine Lucy Murphy of Brooklyn, New York and Nancy Lawler of Cleveland, OH; and a host of nieces and nephews, cousins and friends.

The family of Isom Hermon Lawler created this Life Tributes page to make it easy to share your memories.

Send flowers to the Lawler family.