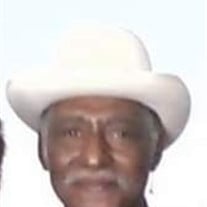 A Celebration Remembering the Life of Mr. Ira James Patterson, 71, of Talladega, Alabama, will be held, Saturday, November 28, 2020, at 12 Noon at S.M. Goodson Funeral Home Chapel with Minister Louise Morris officiating and Minister Carol Moore Eulogist. Interment will follow in Kelly Springs Memorial Gardens. There will be a public viewing for Mr. Patterson on Friday, November 27, 2020 from 1-6 p.m. at S.M. Goodson Funeral Home. Professional services entrusted to S.M. Goodson Funeral Home-Talladega. Ira James Patterson entered this world on April 16, 1949 to the union of the late Lewis Patterson, Sr. and the late Jurline Fomby Patterson in Talladega, Alabama. Ira James Patterson confessed Christ as his Lord and Savior and united with Mt. Canaan Baptist Church. During his youth, Ira attended Westside High School. Upon his completion of school, Ira begin working at Wehadkee Yarn Mill and gave many years of dedicated work until the closing of the mill. It was at this time Ira begin working at Talladega College in the maintenance department for ten years. He later ended his working career after serving as custodian with the Talladega City School System. Ira, affectionately known by many as “Ira James”, was well known for his love of antique cars, fishing, and hunting. Ira James would spend countless hours working on old vintage cars and trucks, which he took great pride in. Along the path of Ira’s life journey, he encountered his soulmate, Mrs. Evangeline (Graham) Patterson and they were later united in holy matrimony; and to this union was born a son, Lynn, and a daughter, Elayne. He had a strong appreciation for his family and kids, but amongst those that were dearest to him were his grandchildren and great-grandchildren. Ira answered the call of his Master and transitioned to his eternal home joining his beloved son, Ira Garrett; parents, Lewis Patterson, Sr. and Jurline Patterson; sister, Doretha Cook; and brother, Lewis Patterson, Jr. Leaving behind to cherish all his love and precious memories are; a loving devoted wife of 45 years, Mrs. Evangeline Patterson; three daughters, Elayne (Roger) Funderburke and Angela Garrett of Talladega, Irish Garrett of Sylacauga; three sons, Lynn (Tamekia) Patterson of Talladega, Ira Debarbelabon of Sylacauga, and Terrell Estelle of Georgia; one brother, Reginald Ray Patterson of Talladega; three sisters, Hattie (Leroy) James, Annie L. Patterson, and Anna Marie Patterson, all of Talladega; ten grandchildren and four great-grandchildren; and a host of nieces, nephews, cousins, other relative and friends.

The family of Ira Patterson created this Life Tributes page to make it easy to share your memories.

A Celebration Remembering the Life of Mr. Ira James Patterson,...

Send flowers to the Patterson family.