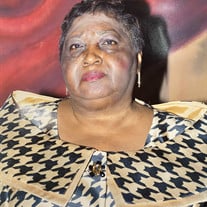 Helen Marie Cook Phillips was born on February 11, 1947 to the late Mr. Willie Cook and the late Mildred Louise Johnson Cook in Talladega, Alabama. At an early age, Helen accepted Christ as her Lord and Savior and united with Africa Missionary Baptist Church where she was a faithful member while serving on the kitchen committee and the matron board. Helen received her formal education in the Talladega County School System where she attended Pine Hill Elementary School and R.R. Moton High School. She was employed many years with Budweiser and Tyson Foods before retiring. Along Helen's path in life, she met and married her soulmate, Mr. Willie Frank Phillips, Jr. on December 26, 1976 and they were blessed with over 46 years of marriage. Helen was affectionately known by her family as "Momma". She enjoyed going to the casino, but most of all, Momma Helen would give you a piece of her mind in the funniest way to let you know she meant business. For many years, Helen loved cooking and baking and would often bake cakes and pies to pass out through the community. After God blessed us with Helen for 75 earthly years, her journey was peacefully completed on January 7, 2022 when she gained her heavenly wings and was called home for eternal rest while surrounded by loved ones in the comfort of her home in Childersburg, Alabama. Once gaining her heavenly wings, she was reunited with her parents, Mr. Willie and Mildred Cook, son, John Lewis Cook, brothers, Augusta Lee (Earnestine) Cook, John T. Cook, Bobby Wayne (Doris) Cook, Willie Charles Cook and Anthony O'Neal Cook. Helen's loving memories will forever be remembered and cherished by her husband of over 46 years, Mr. Willie Frank Phillips; seven sons, James Anthony Cook, Paul Franklin (Freda) Garrett, Tracy Lynn (Olympia) Garrett, Bobby Earl (Shereka) Garrett, Sherman Dewayne Garrett, Anthony Hart and Charles Hart; three daughters, Janet Mae Garrett, Barbara Denise Garrett and Cindy Gail Garrett; three brothers, Sherman Dewayne (Sylvia) Cook, Eddie Dean Cook and Jerry Cook; two sisters, Willie Ann (Johnny) Shepherd and Mattie Louise (Charles) Hardy; thirty- two grandchildren, twenty-eight great-grandchildren and a host of nieces, nephews, other relatives and friends.

Helen Marie Cook Phillips was born on February 11, 1947 to the late Mr. Willie Cook and the late Mildred Louise Johnson Cook in Talladega, Alabama. At an early age, Helen accepted Christ as her Lord and Savior and united with Africa Missionary... View Obituary & Service Information

The family of Mrs. Helen Phillips created this Life Tributes page to make it easy to share your memories.

Send flowers to the Phillips family.