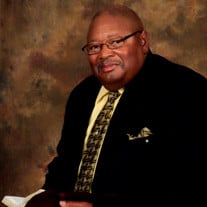 Mr. Harrison H. Mallory was one of nine children born to the union of Louis Mallory, Sr. and Caroline Long Mallory in Alpine, Alabama on July 20, 1945. Mr. Mallory's life's journey of 76 years has truly been a blessing to his family and everyone he has encounter beginning with his youth. As a youth, Mr. Mallory accepted Christ as his Lord and Savior and united with Mt. Zion CME Church in Alpine, Alabama where he served faithfully as Chairman of the Steward Board until his demise. He loved the Lord and his Mt. Zion C.M.E. Church family. Mr. Mallory received his education in the Talladega County School System and was a member of Phyllis Wheatley High School Class of 1964. Upon completing his formal education, Harrison's next path in life would be to serve his country for 4 years by enlisting in the United States Airforce on October 14, 1965. While serving his country, Harrison received several military citations and decorations including: the NDSM, VSM, RVCM, AFGCM, AFM 900-3/AFOUA SOGB-560 and DAF. Harrison also furthered his education and training by completing the Medical Helper Course ABR 90010 with a specialty in Medical Services and soon began utilizing those skills as a Nurse Aid during his enlistment. This skillset proved to be useful while Harrison served in the Vietnam War. After 4 years of dedication to his country, Harrison was honorably discharged. Once returning home, Harrison's journey would not be complete without finding his soulmate and falling in love, which is exactly what he did when he met Miss Patricia Jackson. The two became one when they were united in holy matrimony. To this union was the blessing of two beautiful daughters, Carla and La'Josipha. In order to ensure his family was taken care of, Harrison began his working career in operations with Alabama Power at the E.C. Gaston Steam Plant in Wilsonville, Alabama. Later, he was promoted to the position of Warehouseman with the same company. After 38 devoted years of employment with Alabama Power, Harrison decided it was time to enjoy life to its fullest and retirement was the key. Mr. Mallory was a fun loving and kind-hearted person who loved fishing, baking cakes, grilling, and sports, with the Auburn Tigers being his team of choice. He was an avid Auburn fan. However, Harrison's greatest passion was his family. He loved his family with all his heart and soul and was very family oriented. On the evening of Saturday, July 31, 2021, after God had graciously given Harrison to us for seventy-six long earthly years, He felt it was time for him to peacefully close his eyes one last time to this earthly world, accept his new wings and fly to his new eternal home on high. At his new home, he was greeted by his parents, Louis Mallory, Sr. and Caroline Mallory, sisters, Ruth Mallory Chatman and Janie Mallory Sawyer, brothers, Louis Mallory, Jr., William Mallory, Clifton Mallory, George Mallory, and Charles Mallory. Leaving behind to cherish the many years of Harrison's loving memories are his wife of 50 plus years, Patricia Mallory; two daughters, Carla (George) Cook and La'Josipha (Rev. Dr. Jeffrey) Wilson; four grandchildren: Ashley Cook, Ashton Cook, Addison Wilson, and Brayden Wilson; one sister: Rosa Mallory Lewis; six sisters-in-law: Mary Charles Mallory, Betty Mallory, Sadie Mahan, Willie Jemison, Sharon (Elder Frank) Mathews, and Aileen Garrett; two brothers-in-law: E.D. (Ora) Jackson and Joseph Jackson; and a host of nieces, nephews, cousins, other relatives and friends. Mr. Harrison H. Mallory has left a legacy behind, and he will truly be missed by all the lives he has touched.

Mr. Harrison H. Mallory was one of nine children born to the union of Louis Mallory, Sr. and Caroline Long Mallory in Alpine, Alabama on July 20, 1945. Mr. Mallory's life's journey of 76 years has truly been a blessing to his family and... View Obituary & Service Information

The family of Mr. Harrison H Mallory created this Life Tributes page to make it easy to share your memories.

Mr. Harrison H. Mallory was one of nine children born to the...

Send flowers to the Mallory family.