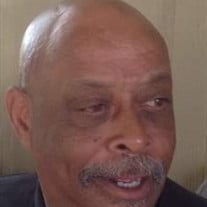 On November 15, 1954, the late Samuel and Ruby Turner was blessed with a baby boy they named Gilbert Turner. Gilbert received his formal education in the Talladega County School System and was a graduate of Munford High School Class of 1973. Upon completing high school, Gilbert's next path in life was to dedicate four years to his country by enlisting in the United States Airforce on October 17, 1973. Prior to Gilbert's honorable discharge in 1977, he received several medals, badges, commendations and decorations including the following: NDSM, AFLSA, AFGCM, and AFR 900-48. Once returning home to his family, Gilbert began working and was employed with the Anniston Army Depot for over 20 years. Gilbert was a character with an endearing spirit. Everyone enjoyed Gilbert's presence. One of his most practical aphorisms was "Hey Mister". Gilbert enjoyed life and life enjoyed Gilbert. He was an awesome caretaker and companion to many friends and family. On September 2, 2021, at 5:24 p.m. Gilbert said his final goodbye while on his earthly journey while under the care of the VA Hospital in Birmingham, Alabama. Preceding him in death were his parents, Samuel and Ruby Turner and sister Cheryl Denise Stallworth. Gilbert loving memories will forever be cherished by his wife, Jackie Turner; two sons, Shaquille Turner and Corderell Miller; two daughters, Nekelia Turner and Tara Turner; one sister, Jackie (Bob) McClain; four grandchildren, Demondre, Giuna, Crea, and Little Meigha; we are thankful for two bonus brothers, Stanley Chatman and Wilfred French who spent several years in the household of Samuel and Ruby Turner; two cousin/sisters, Sharon Hill and Rita Cunningham; special recognition to Aunt Yvonne (John) Swain, Aunt Lillie Martin, Aunt Marjorie (Lawrence) McAdory, Uncle William (Elizabeth) Turner, and Aunt Dorothy Turner. A Special recognition to all of the Uncles, Aunts, Cousins, and friends that had a major impact in Gilbert's life. Thank you to the nephews and niece: Duane, Charles, Cameron, and Nicole. You know how "Uncle G" felt about you guys. He loved all of you. A special Thanks to the Turner family: Rev. Edward Ell Turner, Quincey Turner, Bioncia Turner Brittany Turner, Demetrious Turner, who were all "Gilbert Buddies". Sheldon "Buggy-Wuggy'' Scott, Norman Lee Hall, Michael and Lisa Holiday, Rufus Barkley, who were all a significant part of Gilbert's life.

On November 15, 1954, the late Samuel and Ruby Turner was blessed with a baby boy they named Gilbert Turner. Gilbert received his formal education in the Talladega County School System and was a graduate of Munford High School Class of 1973.... View Obituary & Service Information

The family of Gilbert Turner created this Life Tributes page to make it easy to share your memories.

Send flowers to the Turner family.