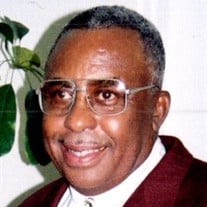 Mr. Fred Garrett was born to the union of Hezzie Garrett and Lurena Jones Garrett in Talladega, Alabama on April 15, 1939. Mr. Garrett's 82-year life journey has truly been a blessing to everyone he has encounter beginning with his youth. As a youth, Mr. Garrett united with St. Campbell Missionary Baptist Church in Alpine, Alabama serving faithfully until his passing. He received his formal education in the Talladega County School. Mr. Garrett's next path in life would be to start his career in the construction industry as a laborer working out of the Local Union 559 in Birmingham, Alabama. After many years of being a devoted and dedicated union worker, Mr. Garrett decided it was time to enjoy the retirement life. Mr. Garrett's journey soon led him to find and fall in love with his soulmate of nearly 20 years, Ms. Bobbie Jean Rivers. They were later united in holy matrimony and together they formed a happy family with a blessed marriage. Mr. Garrett was a fun loving, kind-hearted, energetic person who loved gardening and watching his game shows; but during football season, he was an avid fan of the Auburn War Eagles.... On the afternoon of Thursday, February 17, 2022, after God had graciously given Fred to us for eighty-two long earthly years, he felt it was time for him to peacefully close his eyes to this earthly world, accept his heavenly wings and fly to his new eternal home on high joining his parents, Hezzie and Lurena Garrett; sister, Annie P. Staples; brothers, Avery Garrett, L.C. Garrett, William Garrett, J.T. Garrett, Andrew Garrett and Calvin Garrett. Leaving behind to cherish the many years of Fred's loving memories are his loving and devoted wife of nearly 20 years, Bobbie Jean Garrett; son, DeRay Wright of Cincinnati, OH; two grandchildren, Jeroude Reynolds and Veronica White of Talladega, AL; five stepsons, Terry (Gloria) Garrett of Alabaster, AL, Jerry (Annetta) Garrett of Richwood, TX, Bernard Garrett of Westlake, LA, LaDale (Monica) Garrett of Hobson City, AL and J.D. Johnson of Alpine, AL; four stepdaughters, Denise Wilson of Alpine, Alabama, Jean (Gregory) Spaulding of Smithfield, Virginia, Deborah (Undray) Taylor and Shawnta (Eric) Harrell, both of Smiths, AL; four brothers, Rev. Raymond Garrett, Phillip Garrett and Early (Patricia) Garrett, all of Alpine, Alabama, and Lee C. (Mary Curry) Garrett of Talladega, AL; four sisters, Rosetta Garrett of OH and Phenodia Guyton, Earlene Garrett and Lorene (Larry) Wills; sister-in-law, Ruby N. Garrett of Alpine, AL; and a host of nieces, nephews, cousins, other relatives and friends. Although a pillar of the community has gone before us, Mr. Garrett has left a legacy behind, and he will truly be missed by all the lives he has touched.

Mr. Fred Garrett was born to the union of Hezzie Garrett and Lurena Jones Garrett in Talladega, Alabama on April 15, 1939. Mr. Garrett's 82-year life journey has truly been a blessing to everyone he has encounter beginning with his youth.... View Obituary & Service Information

The family of Fred Garrett created this Life Tributes page to make it easy to share your memories.

Mr. Fred Garrett was born to the union of Hezzie Garrett and...