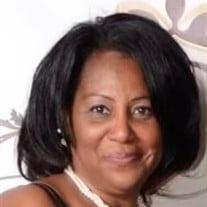 Febbie’s earthly journey began on December 23, 1961 to the parentage of the late Lester Stockdale and the late Febbie Stockdale in Talladega, Alabama. At an early age, Febbie accepted Christ as her Lord and Savior and united with Mt. Cleveland Baptist Church. As a child, Febbie was educated in the Talladega County School system and would later become a graduate of Talladega County Training School, known today as Talladega County Central High School. Upon Febbie’s completion of high school she decided to further her education by attending Alabama A&M University in Huntsville, Gadsden State Community College, and Central Alabama Community College. Febbie earned her nursing degree and remained in the nursing profession until her health begin to fail. She loved nursing, caring for the sick, and helping anyone she could be of service to. She was employed with Citizen’s BMC, ABC Home Health Care, First American Home Health Care, Comfort Care Hospice, and later became an instructor for CNA Academy. Febbie’s love for people never allowed her to meet a stranger. She loved everybody and everybody loved Febbie. She was the life of the party and always kept you laughing. If you knew Febbie Ann, you know she always carried a very vibrant smile filled with love, energy, and enthusiasm. Not only did she love people, she had a passion for dancing and loved to dress, but her most prized possessions were her grandchildren. Febbie will truly be missed by all the hearts she touched and joy she brought to everyone she encountered. The unexpected departure of Febbie has left many broken hearts that only God can heal. As the roads began to get rough and the hills hard to climb, Febbie accepted her heavenly wings as she answered the call of her Master on the evening of January 19, 2021, while under the care of Brookwood Baptist Medical Center in Birmingham, Alabama. Welcoming Febbie at those pearly gates of heaven are her parents, Lester and Febbie Ann Stockdale; sister, Teresa Stockdale; brothers, Bryant Stockdale, Marvin Stockdale, and Donald Stockdale. Febbie leaves behind all her love and precious memories to be cherished by her three children, Brandon Stockdale, Brandy Stockdale, and Pierre (Shonteshia) Stockdale; two granddaughters she raised as her own, Asia and Ronnaisha Stockdale; six grandchildren, Auri, Tea’yonna, Crystyle, Brandon, Jr., Shy’Keith, and Kingsley; seven sisters, Iva Barclay, Mary (Detrolia) Garrett, Chris Chatman, Annette (Dr. Levil) Iroha, Denise (Marshall) Swain, Sylvia Swatts, and Ruthanna Moten; two brothers, Eugene Barclay (Loraine) and James (Fannie) Stockdale; her special and best friend, Angela Player, and her childhood friend, Lisa Brewer-Dixon; God-Daughter, Resha Sims, extended family, The Hunleys, and a host of nieces, nephews, cousins, other relative and friends.

Febbie&#8217;s earthly journey began on December 23, 1961 to the parentage of the late Lester Stockdale and the late Febbie Stockdale in Talladega, Alabama. At an early age, Febbie accepted Christ as her Lord and Savior and united with Mt.... View Obituary & Service Information

The family of Febbie Ann Stockdale created this Life Tributes page to make it easy to share your memories.

Febbie’s earthly journey began on December 23, 1961 to the parentage...

Send flowers to the Stockdale family.