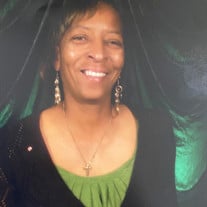 Ms. Eulalia Sistrunk, 61, of Munford, Alabama was born September 21, 1960, to the late Claudie Sistrunk and Leamon Jemison. At an early age, Yogie accepted Christ as her Lord and Savior and united with Shady Grove Missionary Baptist Church where she served faithfully as a member of the choir and on the usher board. She received her formal education in the Talladega County School System and was a graduate of Munford High School. Yogie retired from Aviagen Inc. after 14 years of employment. Affectionately known to all as "Yogie", loved to have fun with family and friends throughout her life. She was very active in community sports/activities such as Boy Scouts troop 340; softball with the Mac's Stars, and volleyball games at Tri Kountry (known as The Court). She loved to hang out and play bingo with her best friend (Vanessa Russell) as well as yard saling with her sisters and family. Yogie was also one of the biggest Alabama football fans in the neighborhood. If you didn't know that...she didn't mind telling you. People just loved to be around her because it was always a good time. But her favorite thing(s) of all, were her grandchildren. She was always bragging about them. You knew that they were always going to be Nana's babies. They could do what they wanted, eat what they wanted, and do No wrong. And all she would say was," I'm the grand momma, it's my job. So, deal with it! And better not whoop them Yogie's life journey ended on December 4, 2021, after a long courageous battle with cancer, while under the care of Regional Medical Center in Anniston, Alabama. Once receiving her heavenly wings, she was reunited with her mother Claudie Sistrunk and her brother Leander Boyd. Yogie will remain in loving memories by her two sons, DeAndre (ShaQuitta) Sistrunk and Derrick (LaShae) Sistrunk, four grandchildren, Jaylandis, Javis, Jahari and K'Derrian; five brothers, Edward Sistrunk and David Sistrunk of Munford, Alabama, Shannon (Amber) Sistrunk of Sylacauga, Alabama, Thomas (Retta) Jemison and Carolton Dark both of Talladega, Alabama; four sisters, Yolanda Sistrunk, Benita (Greg) Oden, Kim (Jessie) Russell and Dawn Boyd all of Munford, Alabama; and a host of very close nephews, nieces and friends.

The family of Ms. Eulalia "Yogie" Berl Sistrunk created this Life Tributes page to make it easy to share your memories.

Send flowers to the Sistrunk family.